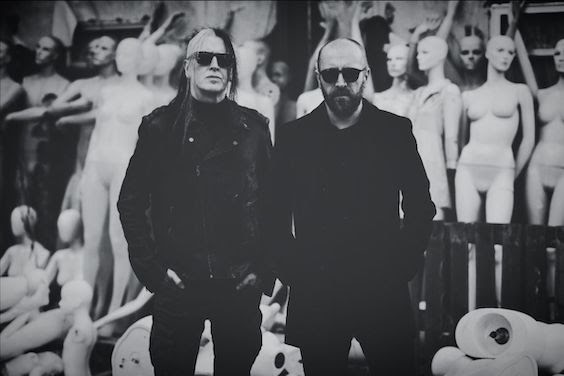 Host have dropped a new single from their recently emerging project titled “My Only Escape.” Check it out here.

This collaboration, headed up by Greg Mackintosh and Nick Holmes, is fairly new on the scene, though Paradise Lost have quite the legacy. This is the third single from their debut album, IX, out February 24 via Nuclear Blast Records.

“Musically, this track has an intentional repetitive element that builds throughout the song; this is also mirrored in the lyric idea, as in the repetition of an everyday life held in such poor regard. The feeling of actually being physically scared acts as an acceptable relief from day to day drudgery.”

According to Host, the project is a chance to get back to the pair’s roots not just in metal, but in their club music das of the late ’80s. During the pandemic, they decided there was no time like the present to release new music.

“We always stood by ‘Host’ as an album,” says Mackintosh. “This project is not totally connected to that album, but some of the ideas are extrapolated. We’re taking the basic premise and trying it out now. And, really, it was something fun and interesting for us to do. We’ve been doing Paradise Lost for a long time and got an itch to try something different from where PL is now. I could take PL down this route again. Who knows? It may happen if we live long enough, but I thought, ‘Why not now?’ I had the time to do it.”

Metal Sucks Greatest Hits
400 -
Danzig is Just Cleaning Up His Motherf*cking Bricks, Bitch
2060 -
How Metal Nerds Choose What Bands To Like: A Scientific Model
0 -
Has Moshing Turned Into a Form of Bullying?
0 -
The Single Greatest Analysis of Nickelback’s Work Ever Written
0 -
Let’s Gossip About How Much Money Famous Metal Vocalists Make
0 -
Viral Drummer Nandi Bushell Pays Tribute to Taylor Hawkins: “Thank You for Looking After Me”