NACHTMYSTIUM’S BLAKE JUDD: “EVERY RECORD WITH US IS A DRUG RECORD”* 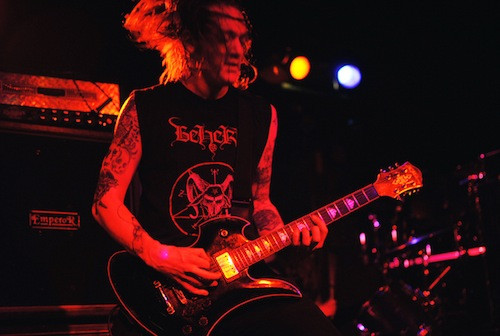 Hats off to No Clean Singing contributor BadWolf, conductor of this fascinating interview with Nachtmystium’s Blake Judd, Will Lindsay and Sanford Parker during their winter tour with Cradle of Filth. Among the topics: Blake Judd’s ongoing struggle with heroin addiction (at interview time he claimed to be drug-free), various band members’ opinions of Cradle of Filth, being labeled a “sell out” by black metal purists, the trials and tribulations of being on record label Century Media, the metal scene in Chicago and more. Here’s an excerpt:

Blake Judd- Every record with us is a drug record. Addicts is the record I made while I was a heroin addict—which I have kicked.

No Clean Singing- Congrats on kicking the habit.

Blake Judd- Well, I only did it so these guys would come on tour with me, and I’m not kidding. That album is about hard living. I want to live hard. I don’t want to skip a beat ever. If I can have a good time I will have it, if I can have an experience I am going to indulge in it, and if I die tomorrow I never had a dull moment. That’s how I want to live my life, and how I have done so since I was eighteen years old.

And with that decision-making process comes a series of ups and downs that you need to be prepared for, but I’ve never let that shit allow me to treat my friends like crap. The issue of keeping yourself under control—behavior, finances… don’t live beyond your means. I’ve tried not to do that. I’ve floundered here and there, but I’ve never walked out of Sanford’s studio in the middle of the night with a $2,000 piece of equipment to go buy dope.

Blake Judd- It’s beyond that, though. I believe that the strength in Addicts is that you can live your life like that and not be a complete fuckup. You choose to let it destroy you. I’m here. I had to kick a fucking bad habit before I left and I did. I didn’t let it bother anyone else in this bus other than 24 hours of me being moody.

I highly recommend reading the interview at No Clean Singing; it’s a great read all the way through. And while we’re on the topic of Nachtmystium and heroin, make sure you check out the nausea-inducing music video for “Every Last Drop” if you haven’t seen it already.

* Apologies for the Bmouth-style sensationalist / out-of-context headline, but I think that quote is quite telling.

Your one-stop shop for all the week’s heaviest releases including Thy Art Is Murder, Rotting Christ, Nachtmystium, Kenosis, Sarah Longfield and many more.

Worst Week Ever 0
Corey Taylor’s Favorite Stories That You May Have Missed This Week
October 26th, 2018 at 5:00pm Axl Rosenberg

Sources close to the situation tell MetalSucks that Judd’s actions are the result of his ongoing struggle with substance abuse.

Mikael talks The Halo Effect, preconceived expectations, performing in the…