David Draiman has posted the following message on both Disturbed’s and Device’s respective Facebook pages. He always TYPES IN ALL CAPS like an old lady who is just learning to use the computer, so I apologize if this is annoying to read:

HOW FAR THE MIGHTY HAVE FALLEN,

I USED TO DREAM OF MAKING THE COVER OF ROLLING STONE MAGAZINE, AS IT USED TO BE THE ULTIMATE STATEMENT OF LEGITIMACY FOR AN ASPIRING MUSICIAN AND IT MEANT THAT YOU HAD REALLY MADE IT. OVER THE PAST 5 YEARS, ROLLING STONE HAS BECOME LESS AND LESS ABOUT MUSIC, AND HAS BECOME MORE AND MORE ABOUT BULLSHIT, POP CULTURE NONSENSE. EVEN THOUGH MANY OF US MAY NOT CARE FOR IT, WE WERE ABLE TO LIVE WITH IT…UNTIL THIS.

YOU…DARE…TO…PUT…THE…IMAGE…OF…THE…BOSTON…BOMBER…ON…THE…FUCKING…COVER…OF…YOUR…MAGAZINE!!!!????
ARE YOU OUT OF YOUR ULTRA-LIBERAL, SYMPATHETIC TO A FAULT, FUCKING MINDS???
YOU HAVE NOT ONLY SUCCEEDED IN BLATANTLY INSULTING AND DISHONORING THE VICTIMS AND FAMILIES WHOSE LIVES WERE FOREVER EFFECTED BY THIS RABID ANIMAL, BUT YOU HAVE NOW GLORIFIED HIS COWARDLY AND UNFORGIVABLE ACT. WHY? BECAUSE IT WILL SELL MAGAZINES? BECAUSE IT WILL CREATE CONTROVERSY? BECAUSE YOU ACTUALLY DO SYMPATHIZE WITH THIS ABHORRENT, COWARDLY, PIECE OF SHIT? YOU HAVE MADE IT ATTRACTIVE AND VALIDATED THE ACT, TO A WHOLE NEW GENERATION OF WANNA BE TERRORISTS SEEKING MARTYRDOM AND INFAMY. YOU, AND YOUR KIND ARE THE REASON WHY PEOPLE THINK THAT THEY CAN GO OUT “IN A BLAZE OF GLORY” WHILE MURDERING INNOCENTS. HONESTLY, AND I MEAN THIS FROM THE BOTTOM OF MY HEART…GO…FUCK…YOURSELVES.

THE NEXT TERRORIST/MURDERING INCIDENT, BE IT ANOTHER BOMBER, OR A MADMAN WITH AN ASSAULT RIFLE, UNLEASHING FIRE UPON A SCHOOL FULL OF CHILDREN, IS ON YOU.

MAY YOUR CONSCIENCES (IF YOU EVEN HAVE THEM) WEIGH IMMEASURABLE HEAVY ON YOU FOR THE REST OF YOUR LIVES. I CONDEMN THIS ACT, THIS NOTION, AND THIS WORTHLESS PIECE OF SHIT FUCKING RAG OF A MAGAZINE. MAY THE POWERS THAT BE HAVE MERCY UPON YOUR SOULS, BECAUSE THE NEXT TIME SOMETHING LIKE THIS HAPPENS, I ASSURE YOU, THE WORLD WONT.

Although I understand Draiman’s concern about giving terrorists and their cause the attention they crave… I also think he’s overreacting. The cover claims that the bomber — his name is Dzhokhar Tsarnaev, by the way — was “failed by his family” and is “a monster.” I haven’t read the piece, but based on those words, I’d be pretty shocked if the tone of the article was in any way positive. Clearly, Rolling Stone‘s intent isn’t to glorify Tsarnaev. I suppose one could argue that Rolling Stone isn’t The New York Times and shouldn’t be doing articles that aren’t related to music, period… except that Rolling Stone has been doing articles that aren’t related to music pretty much forever. For example, here’s recently-resigned President Richard Nixon on the cover in 1974: 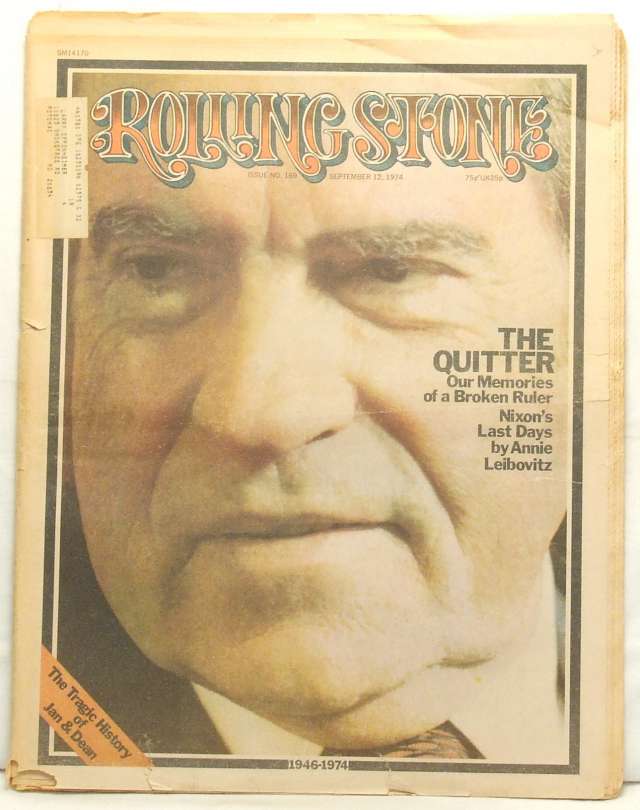 So was Rolling Stone glorifying Nixon? Is the existence of who knows how many lying, scumbag politicians “on them” because they put Nixon on their cover? Or is this different because Nixon didn’t personally build any weapons?

For whatever reason, human beings find human monsters fascinating; additionally, if we don’t learn from our mistakes, well… you know. That’s why people read biographies of Hitler and Stalin and Mötley Crüe. Not (necessarily) because they idolize those people.

It seems to me that Draiman’s stance assumes that the general public will think that anyone who is on the cover of any magazine is cool and a role-model, and cynical bastard though I am, I give people more credit than that. For example, I’ve seen Draiman on many covers of many magazines, and I still don’t think he’s cool. So, y’know. Context is everything.

Incidentally — and I’m sure this has nothing to do with Draiman’s rage — Disturbed have never been on the cover of Rolling Stone. Hm.

Metal Sucks Greatest Hits
0 -
Watch This 10-Year-Old Girl Shred Through Slayer’s “War Ensemble”
0 -
Twenty Hard Rock and Heavy Metal Celebs’ Mugshots
0 -
Twenty More of the Worst Heavy Metal Album Covers of All Time
0 -
Nazi Imagery: Why Watain and Marduk Don’t Get a Pass While Slayer and Metallica Do
1230 -
Loutallica’s LuLu: The MetalSucks Reviews
0 -
New Candidate for Most Metal Wedding Ever: Bride and Groom Shred Down the Aisle