Which Hardcore Band Gets Name Dropped in the Movie Dope?

This weekend I made some time to go see the movie Dope, which was apparently one of the more popular movies at Sundance this year. And it was pretty good! It’s like Risky Business meets Boyz n the Hood. I dug it.

And not just because there’s a pretty funny joke in the flick concerning a very popular hardcore band. And that joke is…

The movie follows three friends from Inglewood — but they’re not gang bangers, they’re nerds. They study, they get good grades, they never get laid, etc. Early in the movie, the Narrator (Forest Whitaker) informs the audience that one of the many reasons the trio catch beatings (literal and verbal) from their peers is because they’re into “shit white people like.” At this point, a list appears on screen of such caucasian-beloved-shit — and one of the things on that list is… 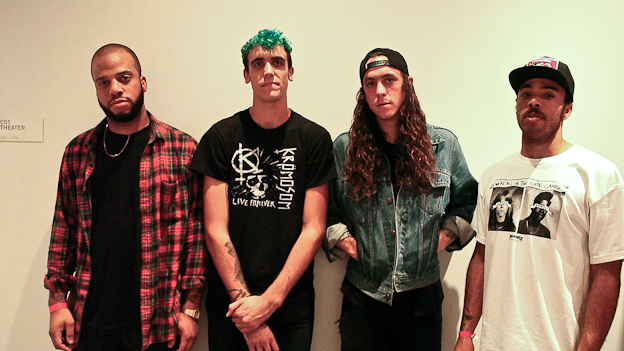 I found this especially amusing given that Trash Talk are on Odd Future (the label of rapper Tyler, The Creator), have performed with Lil Wayne, had a show attended by Suge Knight and Katt Williams last year, and, oh yeah, have two African American members. I would think they’d get a free pass off the “shit white people like” list.

Br00tal-lists 0
10 Surprisingly Hard Tracks From Nu-Metal Records That Were Lost to Time
July 21st, 2022 at 11:43am Emperor Rhombus

Here are 10 nu-metal deep cuts that truly bring the heavy.

Metal Sucks Greatest Hits
0 -
Watch an Old Lady Rock Out to AC/DC’s “Highway to Hell”
0 -
Will People Please Shut Up About the “Fake Amps on Stage” Debate?
0 -
And Now, Here’s a Couple of Dudes Playing Slayer on Pre-School Instruments
0 -
I Am The Working Class: The MetalSucks Interview with Fenriz
0 -
Phil Anselmo on Hearing the End of Pantera’s “Hollow” for the First Time: “I Was Floored…”
0 -
Ex-Attack Attack! Vocalist Caleb Shomo is Smarter than John Holgado