The Ten Most Metal Poems

There’s something about poetry that speaks to metalheads. Perhaps it’s the fact that unlike prose, which can often be flubbed in the name of melodrama or mainstream acceptability, poetry needs to be pointed. As with a killer riff or blastbeat, every word of a poem needs to earn its keep, and those that are superfluous are very obviously so. Like metal, when poetry is bad it is just fucking awful. When it’s good, there’s nothing better in this world.

Sadly, many metalheads have also been driven away from poetry due to a mindset that it’s only for eggheads, faux-intellectuals, and other dickfors who like to brag that they don’t enjoy cheap beer. This has led to a Bill-and-Ted-ish belief that simplistic song lyrics are better than great poetry, because they aren’t hoity-toity. But the best poems are as visceral and affective as any lyrics (by the way, if you ever rhyme “self” with “shelf,” especially claiming that your heart has been put or left “back on the shelf,” you are one of God’s special assholes). The mystique of poetry being impenetrable was just created by nose-hoisters who don’t want to admit that an everyday headbanger can enjoy Pablo Neruda as much as they can.

So here, for your enjoyment, is a list of what I consider the ten most metal poems. Rather than comment on why they’re metal, I figured I would just print them in their entirety, and you can understand what I’m talking about. Yes, Poe’s in there, but no, it’s not “The Raven” (it’s the other one). Enjoy.

If the red slayer think he slays,
Or if the slain think he is slain,
They know not well the subtle ways
I keep, and pass, and turn again.
Far or forgot to me is near;
Shadow and sunlight are the same;
The vanished gods to me appear;
And one to me are shame and fame.
They reckon ill who leave me out;
When me they fly, I am the wings;
I am the doubter and the doubt,
I am the hymn the Brahmin sings.
The strong gods pine for my abode,
And pine in vain the sacred Seven;
But thou, meek lover of the good!
Find me, and turn thy back on heaven.
[via Poetry Foundation]
Aleister Crowley, “The Pentagram”
In the Years of the Primal Course, in the dawn of terrestrial birth,
Man mastered the mammoth and horse, and Man was the Lord of the Earth.
He made him an hollow skin from the heart of an holy tree,
He compassed the earth therein, and Man was the Lord of the Sea.
He controlled the vigour of steam, he harnessed the lightning for hire;
He drove the celestial team, and man was the Lord of the Fire.
Deep-mouthed from their thrones deep-seated, the choirs of the æeons declare
The last of the demons defeated, for Man is the Lord of the Air.
Arise, O Man, in thy strength! the kingdom is thine to inherit,
Till the high gods witness at length that Man is the Lord of his spirit.
[via Poem Hunter] 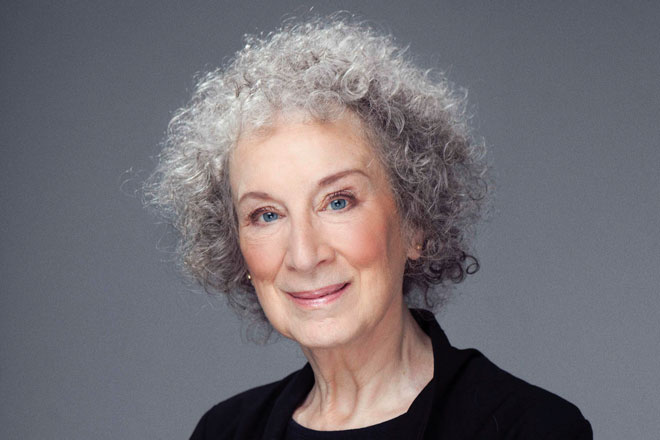 Margaret Atwood, “Siren Song”
This is the one song everyone
would like to learn: the song
that is irresistible:
the song that forces men
to leap overboard in squadrons
even though they see the beached skulls
the song nobody knows
because anyone who has heard it
is dead, and the others can’t remember.
Shall I tell you the secret
and if I do, will you get me
out of this bird suit?
I don’t enjoy it here
squatting on this island
looking picturesque and mythical
with these two feathery maniacs,
I don’t enjoy singing
this trio, fatal and valuable.
I will tell the secret to you,
to you, only to you.
Come closer. This song
is a cry for help: Help me!
Only you, only you can,
you are unique
at last. Alas
it is a boring song
but it works every time.
[via Poetry Foundation]
John Donne, “No Man Is An Island”
No man is an island,
Entire of itself,
Every man is a piece of the continent,
A part of the main.
If a clod be washed away by the sea,
Europe is the less.
As well as if a promontory were.
As well as if a manor of thy friend’s
Or of thine own were:
Any man’s death diminishes me,
Because I am involved in mankind,
And therefore never send to know for whom the bell tolls;
It tolls for thee.
[via Poem Hunter]

Charles Baudelaire, “A Carcass”
Remember, my love, the object we saw
That beautiful morning in June:
By a bend in the path a carcass reclined
On a bed sown with pebbles and stones;
Her legs were spread out like a lecherous whore,
Sweating out poisonous fumes,
Who opened in slick invitational style
Her stinking and festering womb.
The sun on this rottenness focused its rays
To cook the cadaver till done,
And render to Nature a hundredfold gift
Of all she’d united in one.
And the sky cast an eye on this marvelous meat
As over the flowers in bloom.
The stench was so wretched that there on the grass
You nearly collapsed in a swoon.
The flies buzzed and droned on these bowels of filth
Where an army of maggots arose,
Which flowed with a liquid and thickening stream
On the animate rags of her clothes.
And it rose and it fell, and pulsed like a wave,
Rushing and bubbling with health.
One could say that this carcass, blown with vague breath,
Lived in increasing itself.
And this whole teeming world made a musical sound
Like babbling brooks and the breeze,
Or the grain that a man with a winnowing-fan
Turns with a rhythmical ease.
The shapes wore away as if only a dream
Like a sketch that is left on the page
Which the artist forgot and can only complete
On the canvas, with memory’s aid.
From back in the rocks, a pitiful bitch
Eyed us with angry distaste,
Awaiting the moment to snatch from the bones
The morsel she’d dropped in her haste.
And you, in your turn, will be rotten as this:
Horrible, filthy, undone,
O sun of my nature and star of my eyes,
My passion, my angel in one!
Yes, such will you be, o regent of grace,
After the rites have been read,
Under the weeds, under blossoming grass
As you moulder with bones of the dead.
Ah then, o my beauty, explain to the worms
Who cherish your body so tine,
That I am the keeper for corpses of love
Of the form, and the essence divine!
[via Poetry Cat]

Randall Jarrell, “The Death of The Ball Turret Gunner”
From my mother’s sleep I fell into the State,
And I hunched in its belly till my wet fur froze.
Six miles from earth, loosed from its dream of life,
I woke to black flak and the nightmare fighters.
When I died they washed me out of the turret with a hose.
[via]
Mary Elizabeth Counselman, “Witch-Burning”

They burned a witch in Bingham Square
Last Friday afternoon.
The faggot-smoke was blacker than
The shadows on the moon;
The licking flames were strangely green
Like fox-fire on the fen…
And she who cursed the godly folk
Will never curse again.

They burned a witch in Bingham Square;
Before the village gate.
A huswife raised a skinny hand
To damn her, tense with hate.
A huckster threw a jagged stone—
Her pallid cheek ran red…
But there was something scornful in
The way she held her head.

They burned a witch in Bingham Square;
Her eyes were terror-wild.
She was a slight, a comely maid,
No taller than a child.
They bound her fast against the stake
And laughed to see her fear…
Her red lips muttered secret words
That no one dared to hear.

They burned a witch in Bingham Square—
But ere she swooned with pain
And ere her bones were sodden ash
Beneath the sudden rain,
She set her mark upon that throng…
For time can not erase
The echo of her anguished cries,
The memory of her face.

Dylan Thomas, “Do Not Go Gentle”
Do not go gentle into that good night,
Old age should burn and rave at close of day;
Rage, rage against the dying of the light.
Though wise men at their end know dark is right,
Because their words had forked no lightning they
Do not go gentle into that good night.
Good men, the last wave by, crying how bright
Their frail deeds might have danced in a green bay,
Rage, rage against the dying of the light.
Wild men who caught and sang the sun in flight,
And learn, too late, they grieved it on its way,
Do not go gentle into that good night.
Grave men, near death, who see with blinding sight
Blind eyes could blaze like meteors and be gay,
Rage, rage against the dying of the light.
And you, my father, there on that sad height,
Curse, bless, me now with your fierce tears, I pray.
Do not go gentle into that good night.
Rage, rage against the dying of the light.
[via Poem Hunter]
Edgar Allen Poe, “The Conqueror Worm”
Lo! ’t is a gala night
Within the lonesome latter years!
An angel throng, bewinged, bedight
In veils, and drowned in tears,
Sit in a theatre, to see
A play of hopes and fears,
While the orchestra breathes fitfully
The music of the spheres.
Mimes, in the form of God on high,
Mutter and mumble low,
And hither and thither fly—
Mere puppets they, who come and go
At bidding of vast formless things
That shift the scenery to and fro,
Flapping from out their Condor wings
Invisible Woe!
That motley drama—oh, be sure
It shall not be forgot!
With its Phantom chased for evermore
By a crowd that seize it not,
Through a circle that ever returneth in
To the self-same spot,
And much of Madness, and more of Sin,
And Horror the soul of the plot.
But see, amid the mimic rout,
A crawling shape intrude!
A blood-red thing that writhes from out
The scenic solitude!
It writhes!—it writhes!—with mortal pangs
The mimes become its food,
And seraphs sob at vermin fangs
In human gore imbued.
Out—out are the lights—out all!
And, over each quivering form,
The curtain, a funeral pall,
Comes down with the rush of a storm,
While the angels, all pallid and wan,
Uprising, unveiling, affirm
That the play is the tragedy, “Man,”
And its hero, the Conqueror Worm.
[via Poetry Foundation]

Tony talks 'The Toxic Avenger,' Panic At The Disco, and…