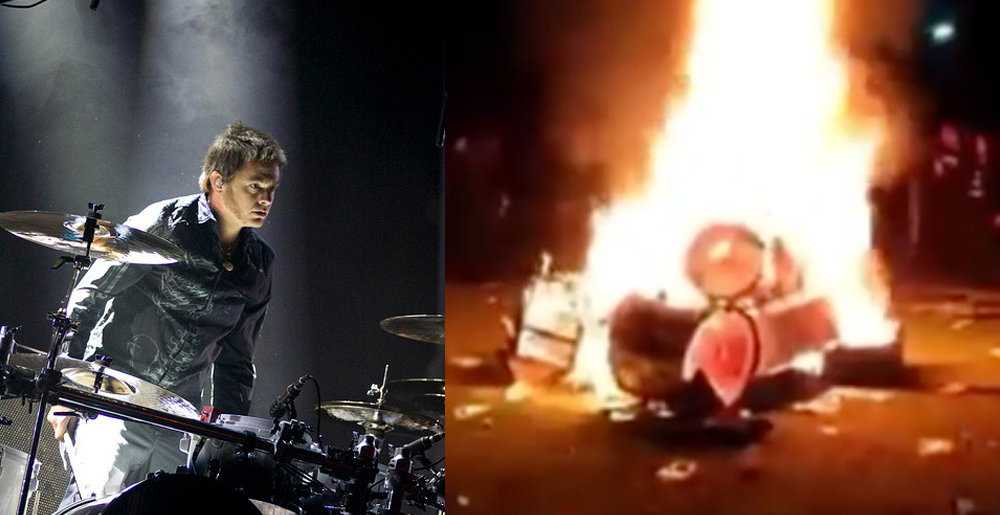 As you’ve likely heard by now, Slipknot were forced to cancel their headline appearance at Knotfest Mexico after fans broke a barricade, stormed the stage, and set Evanescence’s gear on fire (you can read Slipknot’s statement on the matter here). That included the kit belonging to drummer Will Hunt (ex-Black Label Society).

Hunt has now taken to social media to both share video of his drum kit in flames, and to comment on the riots and the aforementioned destruction of his kit. Understandably, he’s upset. Commendably, he insists that this “WILL NOT change my love for the Mexican people or our fans in Mexico.” Less commendably, he uses some misogynistic language to convey his feelings. Which a lot of us have certainly done, but, y’know. It’s basically 2020, let’s try to better ourselves, people.

Hunt’s statement can be read in full below… his actual post, with the videos, can be viewed below that. Evanescence will tour Europe in the spring with Within Temptation and a new drum kit. Get dates and tickets here.

“So, a lot of questions about this. First and foremost everyone is ok. We love Mexico and as a whole the fans are incredible. The riot that happened was a small group of morons and they WILL NOT change my love for the Mexican people or our fans in Mexico. As for the rest of it, here are my (somewhat comical) take aways.

“1st- Do you even riot bruh?! I mean, hell, if you’re gonna do it, REALLY do it!! Burn the whole fuckin’ thing down!!! What you pack of [email protected]$ies did was weak and stupid- JUST LIKE YOU. 2nd. If you’re gonna torch my beautiful @pearl_drums kit that meant the world to me (second video), at least cook some meat or marshmallows over the fire!! Fuckin’ weak ass [email protected]$y AMATEURS!! Again- weak and stupid JUST LIKE YOU. And 3rd- to the kind worker trying to clean up the mess- before you cart off my still smoldering kit (third video and because it used to rock so hard it’s still on fire!!) you should probably make sure the embers are out because IT CAUGHT BACK ON FIRE SMOKEY!!!

“So there ya go……… Moral of the story is don’t half ass anything…… least of which, your fucking riot, which again was WEAK AND STUPID JUST LIKE YOU FUCKING MORONS….”