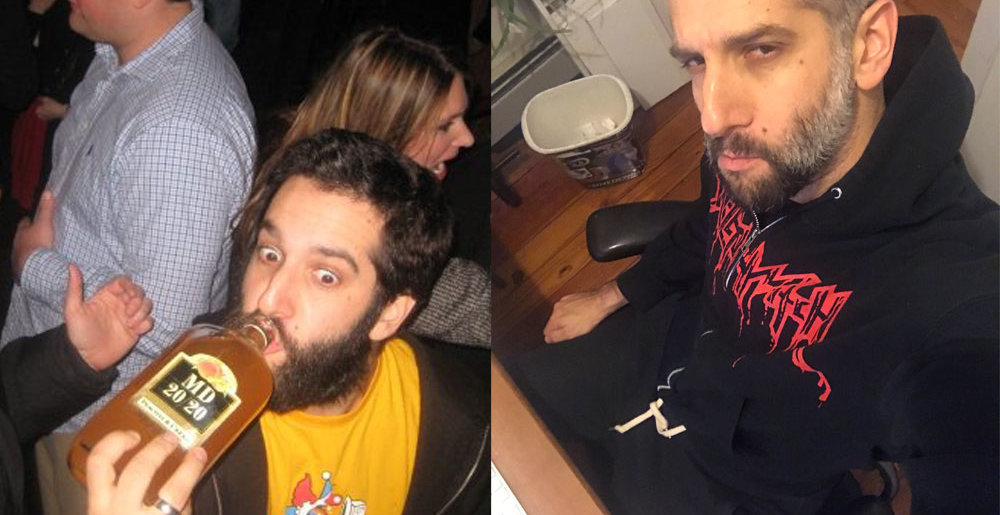 When I write up these little intros to my list each year I try and come up with some kind of theme that allows me to neatly package how my choices reflected growth or change in my own personal tastes, or how they represented some phenomenon in the metal culture at large. I can’t find any such thematic threads this year as my choices are all over the map, so I’ll just say this: I made a conscious effort in 2019 not to get caught up in the album advance treadmill — the never-ending pile of new music publicists send music writers — and instead to just let it ride, to dive into my favorites with reckless abandon and jam them over and over again. These are the albums I listened to the most, the ones that kept calling me back for more.

Spooky! Evil! Scary! Exceptionally talented! Devil Master check all the boxes for a great band in the making, a position reinforced after I saw them live earlier this month (the band’s commitment to their stage gimmickry is exceptional… I’ll just leave it at that lest I spoil it for any of you who haven’t seen them perform yet). I would like to emphasize “in the making,” though, because I don’t feel they’re quite there yet; the mix and production on Satan Spits on Children of Light are a bit lacking, and their stage personas could use a bit more consistency between one another. STILL, this band is fucking fantastic, those issues will sort themselves out organically over time, and I look forward to watching their career arc from here. This is only their first album, after all.

With Air, released in 2016, Astronoid made the metal world turn its collective head and take notice of their proprietary blend of black metal, blast beats and dream pop. This year they returned with all attention focused their way, and not only did they prove they belong in the big leagues and they’re here to stay, but they did so while changing up the formula, a bold and provocative step. The lack of all-out “metal” this time around may have alienated some, but it allowed the band to expand their sound, bring in new fans and opening all sorts of possibilities for the future. Only big things are in the future for these boys.

Opeth comparisons will always follow Soen, whose founding drummer Martin Lopez used to play in the legendary band, and to some extent they’re apt: there are absolutely plenty of Opethian vibes in the band’s music. Soen are neither the death metal Opeth of yore or the King Crimson-worshipping outfit of late, though, rather some alternate version of Opeth from a parallel universe in which prog song structures, metal riffs, hard rock melodies and somber, Katatonia-like vocals are all fair game. This is the first time I’ve paid the band much attention, and the simple reason is that on Lotus the songs landed with me more than they ever had before. I’ll be paying much closer watch from hereon out.

“Citadel” is the single best song Inter Arma have ever put to tape. While I won’t extend such superlatives to every other tune on the album (how could they ALL be the best song ever, anyway?) I will say that Inter Arma continue to fascinate me and capture my attention no matter what they do, one of few bands in today’s extreme metal scene who continually and actively push themselves forward. It’s been a pleasure watching them grow over the years, and Sulphur English continues their upward trajectory.

Sometimes beloved bands disappear for a minute, or just exit your consciousness for whatever reason, to the point where you question whether your attachment to them was pegged to a specific time and place and whether they were really as special as you had thought. Then those bands release new music after a long break and you’re like “Dear lord, of COURSE not, I’m an idiot for even thinking that, holy fuck this band is so good!” That’s exactly what happened with me and East of the Wall on NP-Complete, on which thy resuscitated their iconic blend of quirky prog rock and angular post-hardcore and turned out some of their best jams ever. Great works, lads.

“You want traditional heavy metal? I can do that, too, and I’ll do it better than most,” said Ian Blurton to himself in an imaginary scenario I’ve created in my own brain that sees Blurton set out to prove to himself and to anyone who will listen that he can write songs just as good as Ghost. And so the Change of Heart founder did just that, turning out his finest effort in years and proving that Tobias Forge should give him a ring for some writing ideas on that next Ghost album, Klas Åhlund and the other pop producers Forge prefers be damned.

The main storyline surrounding Batushka this year concerned the lawsuit between founding guitarist Krzysztof Drabikowski and his former bandmate, Bartłomiej Krysiuk — which is still ongoing — but at the end of the day the music did all the talking. Both Batushkas released albums this year, and fans responded by deeming Drabikowski the rightful heir to the throne, celebrating all the musical hallmarks on Панихида that made us fall in love with Litourgiya in the first place.

Soilwork and The Night Flight Orchestra are now almost indistinguishable, and I am 100% OK with that. Soilwork have been wildly inconsistent over the past decade due to their ever-shifting membership and its efforts to “sound like Soilwork,” making forward progress difficult. Not so on Verkligheten, which sees the band dial down the aggression and crank up the melody in a fashion that’s really not a far cry from vocalist Björn Strid and David Andersson’s work in The Night Flight Orchestra. TNFO’s vibe works well in this marginally heavier format (TNFO’s vibe works well everywhere, really), and the evolution of Soilwork into this melodeath/A.O.R. hybrid is a wonderful thing, exactly where the band belongs in 2019.

Blood Command get me going release in and release out! They fire me up, infuse my body with posi vibes and make me wanna shout from the rooftops. Well, maybe not that last part… but at least to the rando sitting next to me on the subway. In any case, Return of the Arsonist is only an EP, but it finds Blood Command as full of the piss, vinegar and good times as ever, cranking out pop-hardcore meets metal jams like never before.

Sometimes a furious blast of traditional heavy metal is just what the doctor orders, and next time that happens I’d recommend a steady prescription of Haunt. On If Icarus Could Fly, the band combines Priestian and Maidenian riffing with Priestian and Maidenian twin guitar leads and Priestian and Maidenian galloping beats… you get the point. Trevor William Church’s vocals aren’t a match for Halford or Dickinson’s, but I’d posit that his approach is what grounds the band firmly in the present instead of hopelessly sequestering them to the nostalgia bin.

5. Voyager – Colours in the Sun (Season of Mist)

A late addition to my list, Voyager have stepped out of djent’s shadows and emphasized the electronic and synth elements of their sound this time around, catapulting the band into territory solely and fully occupied by them. Colours in the Sun has songs for days, each wholly capable of sucking you into the nexus of chuggy, downtuned riffs, razor-sharp synths and ’80s new wave / synth-pop. Periphery meets Depeche Mode, as I’ve been wont to tell friends to whom I’m excitedly enthusing about this album.

Divided by Darkness is at once excitingly new and comfortingly familiar, working from the band’s base template of doom/psych/stoner metal and building upon it with blatant homages to their influences, often comically so (more on that here). It’s their knack for reinventing the past, and their ability to do so while still sounding fresh, which is their most appealing trait, though; Spirit Adrift are the band we all wish we formed to pay tribute to our musical heroes through our own artistic voices, one insanely catchy riff at a time.

That industrial revival I predicted a few years ago is now in full swing, and no band is more emblematic of it — or better at it — than 3Teeth. Pulsating blips, bloops and keyboard atmospherics provide the backbone for the band’s hyper-rhythmic approach to modern industrial metal, tuned down farther and played with more gusto for the modern headbanger. Vocalist Alexis Mincolla’s lyrics, often charged with political and social commentary as well as tales of his own personal darkness, bring everything full circle to revive the picture of a dystopian underworld from the genre’s best of yesteryear.

With Rhizomes of Insanity, it feels as if Fractal Universe finally accomplished what bands in the progressive and technical death metal spheres (loosely speaking) have been attempting for the past two decades: a truly accessible, catchy as fuck, song-based album. Yeah, sure, Obscura, The Faceless, Psycroptic and a handful of others have flirted with the concept, but they always find themselves back in their respective comfort realms. Fractal Universe were born to deliver four-minute nuggets of catchy, juicy, almost radio-ready death metal, and they’ve done it with aplomb.

From the moment I first laid eyes and ears on the live video for “War” (below), it felt inevitable that this album would land on my year-end list. I was transfixed, enraptured, completely taken. First and foremost, Stefanie Mannaerts’s vocal performance really takes this album to the next level, at once poised and controlled while feeling as if it might crack at any moment with its raw intensity, and the fact that she’s able to turn in such a dynamic drum performance while doing all that. And that’s to take nothing away from the band, whose lush arrangements provide the atmosphere that makes it all possible. The songs are brilliant, memorable from listen one, and the overall sound feels fresh and new, even if no single element is remarkably innovative on its own. All of that makes Nest one that’ll surely be spinning here and elsewhere for years to come.

This week we resume our annual best-of-the-year episode with part two, featuring our five favorite albums of 2019. We play a couple of tracks from [...]