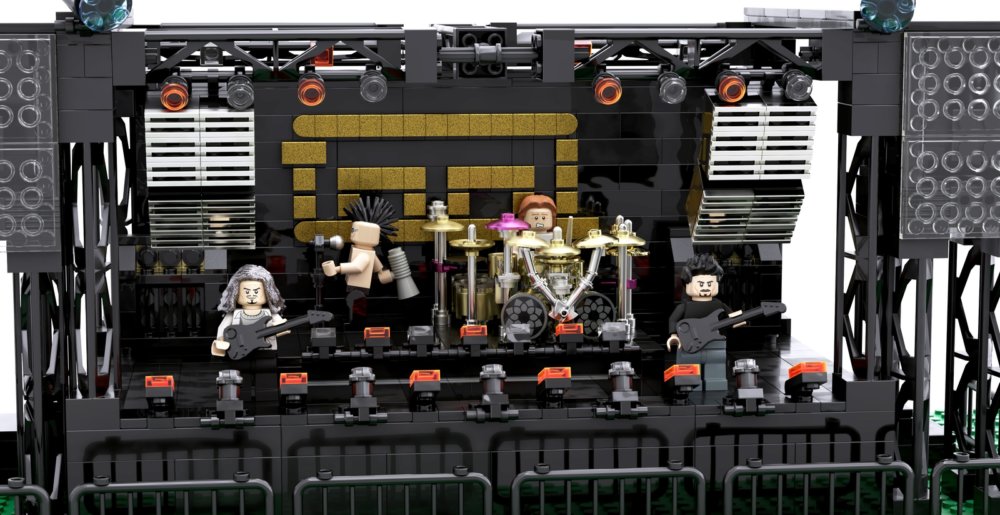 This Tool Lego Set is a Must-Have!

Are you instantly in love with the idea of a Tool-themed Lego set? Patience, friends: it could well become a reality, but you’ll need to wait at least 480 days for it. In Tool Time — those of us accustomed to waiting 13 years for a new album — that’s, like, only a few hours! No biggie!

So: Danish toy manufacturer Lego has an initiative involving fans and collectors called Lego Ideas, in which they invite the general public to “share your cool creations and creativity, enter prize competitions, showcase your proposals for new LEGO Ideas sets and vote for awesome models dreamt up by your fellow fan designers.” One Lego enthusiast who is also a Tool fan decided to combine his love for both things into one project, putting together an intricately detailed Tool stage setup made entirely out of Lego, with miniature renditions of Maynard, Danny, Adam and Justin that are extremely true-to-life in all ways but size. We’ve posted some photos for you at the bottom of this post.

Lego Ideas user bloclsandmocs, who created the set, had this to offer (slightly edited for clarity):

“This project is a tribute to the legendary rock band: Tool. I was inspired from the recent fulfillment of a long anticipation, 18 years off [sic] wait that Tool will release a new album. Tool have accompanied me throughout my life, as a meaningful and Integral part in the soundtrack of my life, to this day and on.

“I think a series of a musical stages and artists would appeal to many Lego fans. It would be a unique way to connect and show the musical influences you may have, your favorite rock bands, even a good show you watched or wish to visit. Music is a fundamental element of life, it accompanies us In so many different ways. The possibility of integrating music with Lego is fantastic! Upgrading the interactive and displayable features of Lego.

“When I published these models in social-media it achieved high interest and request to purchase. I was gladly surprised to find out that even among music fans which are not a regular Lego buyers the interest was high. I believe that a series of this kind would enlarge Lego kits buyer due to versatility and collectable qualities of this sets.”

Mr. Blocksandmocs is certainly right about one thing: Tool fans who generally have no interest in Lego at all would snatch a set like this right up. Tool fans are precisely the kind of fanatics that want their hands on anything related to the band! The entire concept of Funko Pop! figurines is based on this premise, and I reckon band-themed Lego sets would sell quite well, too.

The Tool Lego initiative has currently gathered nearly 2,000 supporters, and once it reaches 10,000 it will be submitted to the company for “expert review.” Show your support right here and help the project reach that goal!

Have a look at some of the photos below. An earlier version of the project had Justin Chancellor and Adam Jones as lefties but that has since been corrected, while other upgrades include a megaphone for Maynard and a more detailed drum kit for Danny Carey.

Metal Sucks Greatest Hits
0 -
Editorial: Your Dead Metal Heroes Were No Angels
0 -
Debunking the Myth that Guitar Hero Made Dragonforce
0 -
Footnotes: A Handy Catalog of Every Song from Which Avenged Sevenfold’s Hail to the King “Borrows”
0 -
So As it Turns Out, Banging Your Head a Bunch Can Be Bad for Your Brain
0 -
King Crimson’s Robert Fripp & Toyah Willcox Cover “Teenage Kicks”
0 -
Peep These Awesome Pop Stars Gone Metal Shirts