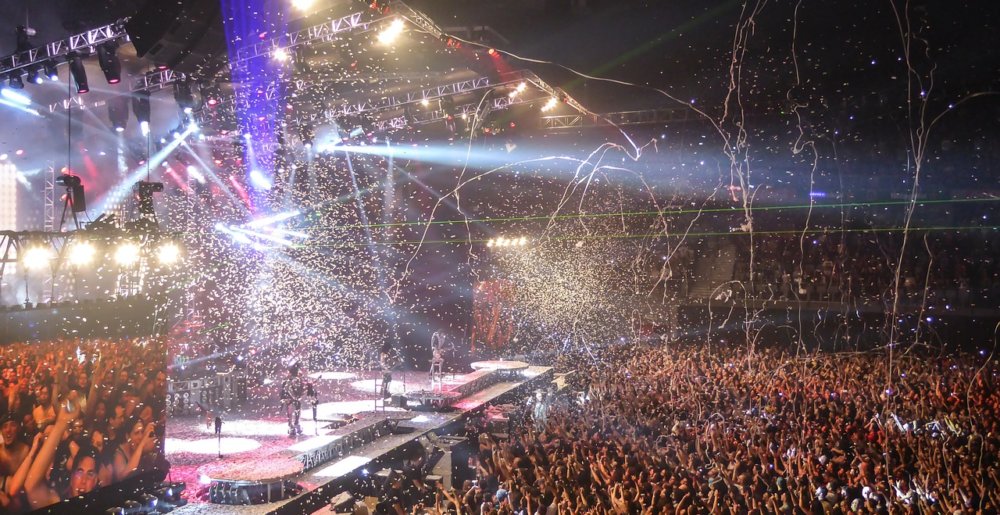 Three Reasons Why Metal is More Than Just Music

There’s a whole lot to love about metal: either you love it or you don’t, and something inside of you is awakened when you hear the chug of distorted guitars, relentless blast beats, stomach-churning guttural growls, and a cacophony of other unholy noises. But for fans of the most extreme form of music, it’s more than just the sounds that makes heavy metal appealing.

Heavy metal is so much bigger than the music itself. It’s a family, a style, and often even a therapist. Naysayers that dismiss it as “just noise” often fail to understand why those of us that truly fall for the genre never do seem to grow out of that “phase.” For the initiated, it’s a no-brainer…

What do you get when you mix a load of folks that typically feel like outsiders in society and who share a mutual love of something?

A rock-solid community, for one. All around the world a black t-shirt with barely legible, spidery text will grant lifetime membership to this non-exclusive club. Of course one doesn’t necessarily need to dress metal to be metal, but it’s a surefire signifier that someone has common interests as you.

The initiated enjoy a host of perks, too. A shared appreciation of metal leads to lifelong friendships, access to a worldwide network of like-minded, creative individuals, and sometimes even love interests. Relationships in metal form fast. Don’t be surprised if you’re friends for life with that hesher you headbanged to The Black Dahlia Murder with at Brutal Assault Fest.

Contrary to what an outsider might think, the heavy metal community isn’t some bawdy, sprawling mass of strung out adolescents in league with Satan. The work of Ph.D. student Lindsay Bishop shows that heavy metal culture is friendly, healthy, and highly inclusive. Members come in different genders, ages, races, and sexual orientations to bond over the pig squeals of their favorite singer, any drop-C tuned guitar, or extended passage of double kick blasts.

As well as being distinctive on the ears, heavy metal is pretty unmistakable on the eyes. Whilst there’s a whole host of metal “looks,” there are a few things that unite the different flavors of heavy metal fashion. Black, skulls, tattoos, leather, denim, cut-off shirts with impossible-to-decipher band logos, and obscure band patches – all are tell-tale signs of a heavy metaller.

Annoyingly for the true outsider, more popular fashions are ever ready to “borrow” from heavy metal style. The irony is, the very folks that used to bully kids in high school for wearing their favorite band’s shirt are now the ones buying Iron Maiden tees from high street stores.

Of course, metal style and culture has been borrowed for loads of things over the years. Hollywood has cashed in on it, extreme sports brands have taken cues from metal, and even casino culture has used it.

In fact, log on to just about any online casino and you’ll find a host of games based on metal. The likes of Motorhead and Kiss have both been made into great slot machines by some of the industry’s biggest names. Other games borrow heavy metal riffage for stylistic effect, too. iSoftBet’s Heavy Metal Warriors is a prime example. It might be more AC/DC than Ion Dissonance but with metal still not being quite in the mainstream, that’s about all you can hope for!

Clearly, heavy metal has marketing power. Technically, that’s vindication from the mainstream. That said, it still doesn’t mean we have to enjoy seeing Justin Bieber in a Metallica t-shirt.

Music is a very powerful force. Listening to your favourite tunes can help people process feelings, focus, charge up, or chill out.

Metal is a particularly powerful form of music. Loads of evidence exists to suggest that the music itself can be useful for promoting feelings of calm (contrary to the aggressive nature of the sounds themselves). In this calmer state, the listener is better able to process complex emotions, leading to generally better mental health.

It’s not just the music itself that can help with your emotional well-being, though. The metal community is about a lot more than chugging beers and playing air guitar. It’s a support network of sympathetic ears and a non-judgmental, welcoming social group. For those that have felt isolated all their lives, feeling part of something can be a powerful antidepressant.

Whether it be social support, wardrobe advice, self-help, or just a killer soundtrack, heavy metal is a lot of different things to different people. Metal is more than music. A lot more.

Metal Sucks Greatest Hits
0 -
Watch This 10-Year-Old Girl Shred Through Slayer’s “War Ensemble”
2510 -
Rose Funeral: The Uno Incident?
0 -
It’s Official: There is Too Much Slayer Merchandise
0 -
I, For One, Welcome Our New Robot Overlords
0 -
Twenty Hard Rock and Heavy Metal Celebs’ Mugshots
850 -
All My Heroes Have Failed Me