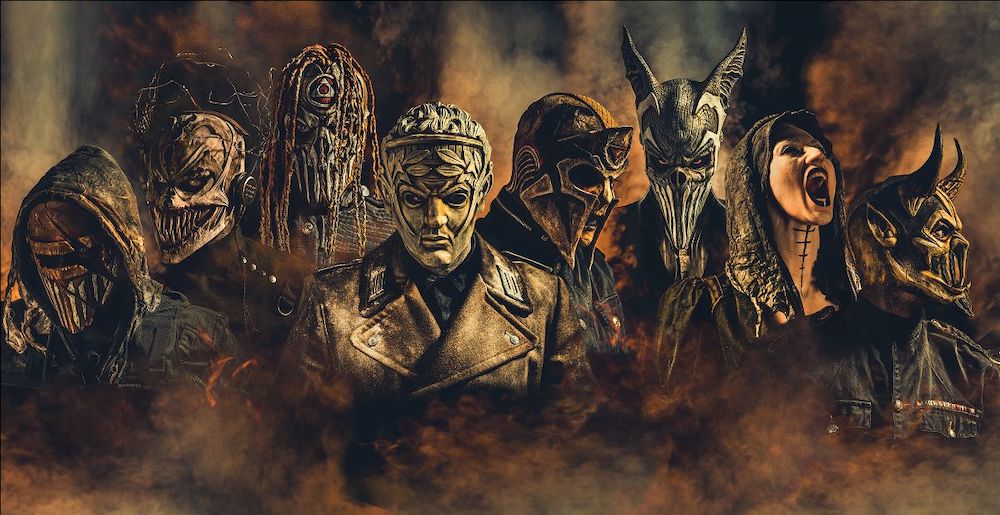 People who don’t know which side Ohio fought for in the Civil War, rejoice! Mushroomhead have announced that they’ll release a new album, A Wonderful Life, on June 19 via Napalm Records. You can check out the first single, “Seen It All,” via the below music video, which was directed by the band’s drummer, Steve “Skinny” Felton.

I imagine this news will be super-duper exciting for all the Fungi, or whatever the band calls their fans, because it’s their first album in six years. Also, because the album will mark the recording debut of some new Mushroomheads… specifically, guitarist Tommy “Tankx” Shaffner, vocalist Steve Rauckhorst, and, of course, Taco Dude.

It also appears that Skinny’s partner, Jackie LaPonza (Unsaid Fate), is now a full-time member of the band. She’s toured with them in the past and appeared on a handful of tracks on 2014’s The Righteous & the Butterfly, but now she’s in their new promo photo (above) and listed as a member in the A Wonderful Life press release. She’s also in the “Seen It All” video, although if you blink, you may miss her.

The tour has been moved back to 2023 due to the usual reasons.

The most exciting thing about this news is that it means we’ll know who Fear Factory’s new mystery singer is no later than February.

Metal Sucks Greatest Hits
0 -
Meet Ironbunny, the New Babymetal
0 -
Watch This Kid Perform Europe’s “The Final Countdown” Entirely with Hand-Farts
0 -
For $16,000, Ted Nugent Will Stay the F*ck Away From Your Town
3160 -
Down With The Sickness: God Forbid’s Doc Coyle Takes on Mainstream Metal
540 -
Matt Pike’s Top Ten T-Shirts
0 -
Video: Dudes Rockin’ Out to Van Halen Meet David Lee Roth, Have No Idea Who He Is