Metal Sucks
Metal Sucks Why Most People Give Up When Learning to Scream (And How to... “Along Came” This New Primal Fear Song
- Tweet SHARE
Enlarge
Editorials 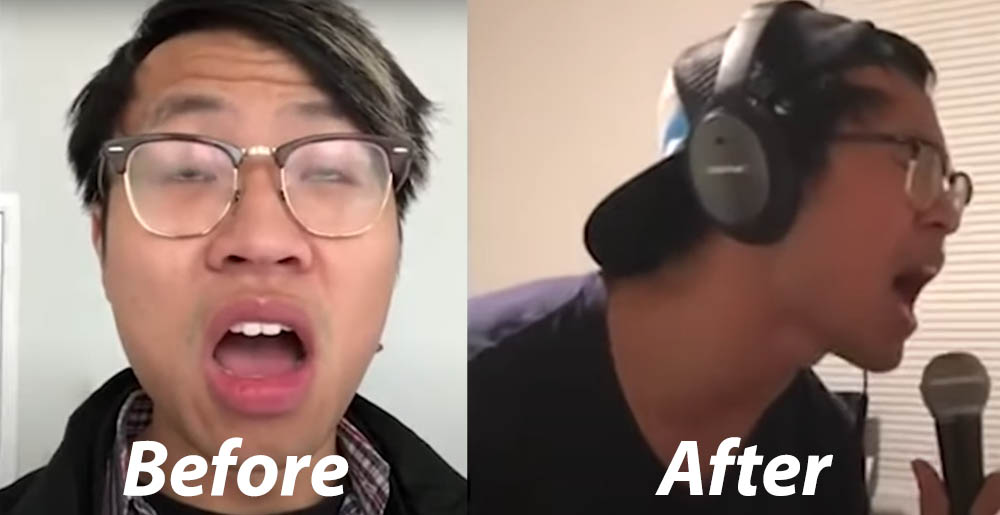 Have you tried to scream before but gave up?

Maybe you’ve tried to scream along to your favorite songs in the car, but stopped because your throat felt like you swallowed glass.

Maybe you’ve recorded yourself but when you listened back to it you cringed SUPER hard.

Maybe you’ve been disheartened by YouTube tutorials which all seem to just regurgitate the same vague instructions that don’t work.

I wanted to scream for over ten years, but kept on throwing in the towel.

The belief that I wasn’t born with “the talent,” the fear of hurting my voice, and the fear of embarrassing myself around others held me back.

However, after taking it upon myself to research the anatomy of the throat and study the psychology behind the learning process, I was able to go from sounding like a constipated old man to being able to let out brutal screams safely and express myself through my voice.

Since I know first-hand how hopeless it can feel to not see results with my screams, I want to talk about the five barriers that lead most beginners to give up… AND how to get over them!

1. The Belief that you’re not born with “the talent”

It’s easy to listen to Phil Bozeman, Travis Ryan, Trevor Strnad and your local scene’s vocalists and conclude that they were somehow hand-selected by Satan himself to be able to scream.

There’s no hidden extra flap they have or sorcery they employ. All your favorite screamers all have the exact same instrument as you. You all have vocal cords, vestibular folds, a diaphragm and nasal tissues that are used in unlocking your scream.

In fact, check this video out of a friggin’ BABY doing vocal fry and false cord screams!

And not only CAN you scream, you have DONE IT before. Now all you gotta do is re-access that ability and get out of your own way!

2. Fear of hurting your voice

Although I agree with the consensus that bad technique can damage your vocal cords, what I don’t agree with is how YouTube tutorials will often make it seem like if you feel pain once, your voice is going to immediately need surgery.

The reality is that you will only develop damage if you’ve been screaming incorrectly and going hoarse night after night on tour for an EXTENDED period of time.

So what I recommend is practice QUIETLY first until you can get the tone you want without it hurting. When you practice quietly, you are further minimizing damage. Once you get the tone down, focus on building resonance and making that louder.

3. Fear of screaming around others

Believe it or not, a lot of people won’t even start practicing because they’re too embarrassed by the thought of their roommates or family members hearing them!

If this is you, I’m going to challenge you to be resourceful! Scream in your car or go on a walk at night time and practice while you do that.

Let’s say that for whatever reason you HAVE to stay at home while practicing screaming, you can just tell your housemates/family that you’ll be practicing! Once you’re upfront about what’s going on, things will be WAY less awkward!

Seriously, think about it: if your roommate came up to you one day and said ‘Hey! Be forwarned, I’m gonna learn how to scream. So don’t be alarmed if you hear me occasionally making noises, haha,” would you make a huge deal about it? Probably not!

And that is typically what friends and family members will do, too. So if you feel awkward, just flip roles and realize that there’s nothing to worry about.

This is pretty straightforward, but without knowing the anatomy of screaming or having a good framework for systematically unlocking your scream, it’s difficult to even know how to practice. With no clear pathway to success besides, “Oh, just practice,” a lot of people get discouraged and give up. If you want to get GOOD information, I’ll leave a link in the description for my free crash course that gives you a good high level overview about the best way to go about unlocking your screams!

Knowing your vocal anatomy will give you context as well as the framework on how to practice.

A lot of YouTube tutorials present things as a one size fits all solution. They often exhibit what’s called survivorship bias, where someone can vouch for what worked for them even though the reality is that everyone has a different relationship with their body. Since I’ve taught literally thousands of people, I know that no ONE TECHNIQUE works for everyone to learn how to scream, but there are several principals that apply to everyone. Since most screaming tutorials don’t take that into account, a LOT of people think they aren’t cut out for it and give up when in reality they just didn’t find the approach that worked for them.

For me, the biggest thing that prevented me from unlocking my scream was not knowing about “The Dip.”

When starting ANYTHING, a person will see some quick wins. But EVEN with good information, they will notice that as they continue to practice that they’ll eventually hit a point where they aren’t seeing any improvement, even though they are still practicing.

This is the point where most people give up. However, what people don’t know is that if you keep going and keep persisting even though you’re not seeing improvement, you will eventually hit a point where you see MASSIVE improvement. Simply being aware of this inescapable process when developing a skill will allow you to push past this dip a lot less painfully.

So, to review, the five factors that keep causing you to give up are:

I recently read a book that made a huge impact on me called The Untethered Soul, written by Michael Singer. One thing that resonated with me was the importance of clarity. According to Michael, when we don’t know why we do certain things, our brain easily concludes, “Hey, it’s just fate.” But when you become crystal clear on WHY you feel and think certain ways, you can FINALLY release yourself from “fate” and work towards a solution.

By reading my article today I hope you can start to break through your mental barriers and begin to realize, “Hey, I CAN do this!” and you are not fated to a scream-less life.

So great. What now?

If you want to take your screaming to the next level and really want to speed up your learning progress, sign up for my free crash course on metal screaming using the form below! (or sign up here if that doesn’t work)

A lot of people have unlocked their screams from it and I think it will help you a lot if you’re still struggling.

A metal parody of the popular video game.

Editorials 0
Why I Put My Experience Of Being In A Metal Band On My Resume
October 20th, 2017 at 10:35am MetalSucks

Your experience in a metal can help you land jobs.