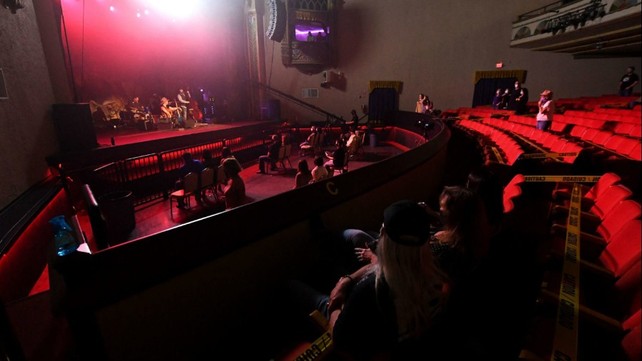 Here’s What the First Socially Distant Concert Looked Like

The first socially distant concert in the U.S. took place last night, May 18, at TempleLive in Fort Smith, Arkansas. Bishop Gunn frontman Travis McCready performed to 229 attendees, reduced from the venue’s capacity of 1,000 to comply with social distancing regulations, after the show was moved from its original May 15 date to meet state regulations.

Photos and videos of the event show the much-publicized safety guidelines in effect, including masked fans seated in groups of “fan pods” consisting of small groups of friends and family that had been isolating together. All concertgoers had their temperatures taken at the venue’s entrance, and a number of other safety guidelines were put into effect, detailed here.

Watch a local news report below, followed by some video clips of the concert posted on social media showing both the performer and the audience.

This venue was built specifically to accommodate social distancing. It worked!

Coronavirus 0
First “Socially Distant Concert” Struck Down by Arkansas Governor
May 14th, 2020 at 8:33am Vince Neilstein

The concert by Bishop Gunn frontman Travis McCready was scheduled for May 15 but now will not take place.