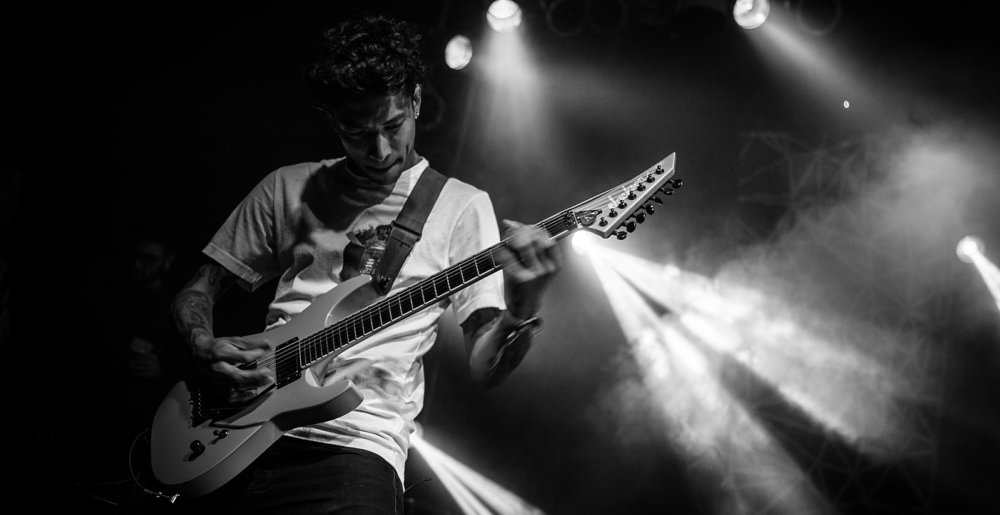 Veil of Maya Guitarist Provides Update on New Album: “Heavy is the Move”

Veil of Maya guitarist and primary songwriter Marc Okubo joined us on The Quarantinecast earlier this week and provided a substantial update on the progress of Veil of Maya’s next album, which will be their first since False Idol, released in October of 2017.

First, the good news: Okubo says that eight songs are mostly written and recorded, and that he expects the album to come out in early 2021. Huzzah!

Next, the bad: Marc was forthright with us about some writer’s block he’s experiencing as a result of being locked inside during the pandemic — expressing his preference to draw inspiration from the outside world — and some fatigue that’s set in with regards to the songs that are already on tape.

Fear not, though, Veil of Maya fans: he concludes with confidence that he’ll push himself through it.

Okubo offered of his writer’s block:

“And also not knowing when concerts are going to come back is also not the most motivating thing, especially for this kind of music, this is music that’s meant to be played live. I grew up going to hardcore shows, and you don’t play that kind of music to sit in you room and meditate. It’s an aggressive, social thing.”

On the songs that have already been recorded for Veil of Maya’s next album, and how he feels about them currently:

“I was working in a studio last year on the album, and we were able to record skeletons of maybe like, eight songs, so it was kind of an incomplete album. And then we were going to finish after the tour, or on the tour and after the tour, and all this happened. So now it’s just kind of disenchanting to listen to it ’cause it’s not finished and I’ve already heard it a lot.

“I mean, I guess right now I want to start from scratch and write as many new songs as I can and maybe go back and finish the old ones and have a lot of material. I guess that’s where I’m at right now.”

On the musical direction of the next record, and the desire to strike a balance between being heavy, progressive and catchy:

“I am feeling that remaining a heavy band is the move and kind of going back to our roots is the vibe. I know that there’s still going to be people that don’t like singing obviously, and I’m aware of it, but at the same time, we make a lot of new fans.

“So I kind of want to have a few songs that do kind of have that technical death metal vibe that we used to, but at the same time I’d like to mix that into the progressive world as well.

“I don’t know if going full radio rock is the move for us, I don’t think our fans will believe that. I know that it would be beneficial in some ways… trying to find a middle ground between all of that is what I’m working on.

“But I feel like heavy is the move and if it’s catchy enough for radio, whatever, but that shouldn’t be the main focus of our songwriting.”

On the potential timeframe for the next album’s release:

“Realistically it will be very early next year just based off of everything that’s happening. Hopefully I have it written by the end of next month or so, that’s the goal. I can’t even play video games or watch TV cause I always feel like I’m supposed to be working on the album. I don’t like being pressured [laughs], I like hanging out and having it come… like [these songs] usually write themselves, you know what I mean? So I’m just out, hanging out with people and I’m like ‘Ah! Idea!’ And then, there it is.”

Listen to our whole 20-minute chat with Marc below, including a bit about the devastating blow of the band’s tour with Dance Gavin Dance and Animals as Leaders being canceled when they arrived to the run’s very first venue.

“Because of the actions of certain individuals.”

Parts of it are EXTREMELY poppy.