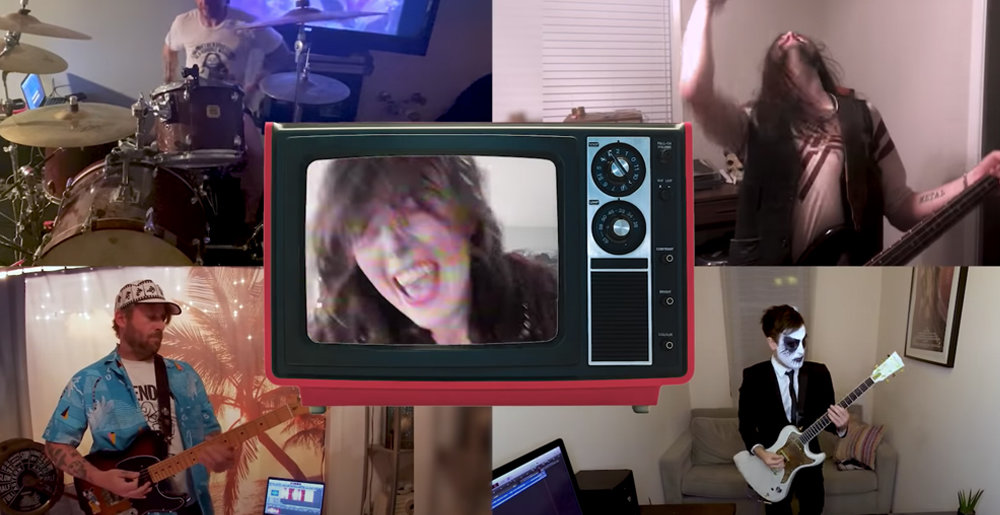 The all-star quarantine covers put together by Two Minutes to Late Night host Gwarsenio Hall (né Jordan Olds) have ranged from being fairly loyal to the original (Danzig’s “Snakes of Christ,” White Zombie’s “Super-Charger Heaven“) to wildly different from the original (Ozzy’s “Crazy Train”) to somewhere in-between (Steely Dan’s “Reelin’ in the Years“).

The latest, a cover of “Rocket Queen” by Guns N’ Roses, falls in that last category: it’s distinctly heavier than the original song, and drummer Chris Maggio (High on Fire, Wear Your Wounds), bassist Bill C. Robinson (Cloak), and guitarist Ryan Primack (Poison the Well) are all doing stuff that simultaneously sounds appropriate for the track’s general vibe while being distinctly not how the original was performed (Primack really only stays loyal to the original when he takes on Slash’s second guitar solo, and even there, he takes some liberties). On the other hand, Gwarsenio and Alexis Krauss (Sleigh Bells) don’t diverge much from Axl Rose’s original vocals (Krauss even wore her best Axl costume for the video), and at no point would you not recognize the song.

I think it’s pretty cool… and the group definitely gets extra points for having fun with some famous GN’Risms, like dolphins, old tv sets, and, especially, the orgasm sounds in the middle of the song, which are infamously said to be Axl Rose having sex with Steven Adler’s girlfriend. I won’t give away the gag, but it’s pretty goddamn funny.

All this cover ever wanted was for you to know that it cares:

Metal Sucks Greatest Hits
0 -
The formula 4 good music: Generic, but with a gimmick (*please read*)
0 -
New Candidate for Most Metal Wedding Ever: Bride and Groom Shred Down the Aisle
0 -
BREAKING: Ex-Suffokate Vocalist Ricky Hoover Successfully Undergoes Earlobe Reconstructive Surgery
0 -
Footnotes: A Handy Catalog of Every Song from Which Avenged Sevenfold’s Hail to the King “Borrows”
0 -
Carcass’ Swansong: A Newbie’s Retrospective Review
0 -
L.A. Band Threatin Faked a Fanbase To Land a European Tour No One Attended