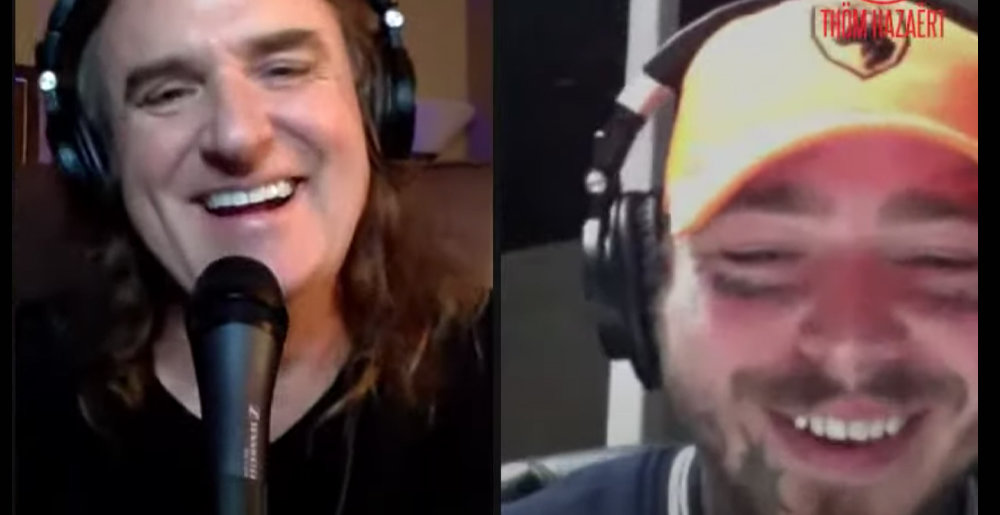 Right around the same time that Lars Ulrich was surprising a pediatric ICU nurse during a live video chat, Post Malone was surprising Megadeth bassist David Ellefson and his business partner, Thom Hazaert, during a live video chat of their own. And while you might assume that the conversation between a starstruck fan and a rock star would be more awkward than a conversation between three bona fide music industry professionals, you’d assume incorrectly. Watching Ellefson and Hazaert fawn over Malone and try to talk about beer pong is like watching a pair of uncles who don’t see their nephew very often trying to connect with said nephew at a family gathering right after he’s started his freshmen year of college. There’s an abrupt segue where Ellefson suddenly asks Malone to show the camera his So Far, So Good… So What! tattoo, and it is just… [shivers]… y’know? It actually adds a whole new dimension of discomfort to Ellefson’s recent cover of Malone’s “Over Now.”

I’m not even knocking the older men — Ellefson has thirty years on Malone, and I’ve only got fourteen, and I’d still probably act the same way around the rapper and noted metalhead. I’m just saying that I think there’s something to Vince’s assertion that it’s hard for people to truly be peers when there’s such a vast age gap.

You can watch the discussion below. If you don’t wanna watch the whole thing, Malone enters around the 51-minute mark. The part you’ll probably find most interesting: Malone named Megadeth, Metallica, and Pantera as his favorite metal bands and then did a quick impersonation of Phil Anselmo. Good stuff.

Metal Sucks Greatest Hits
0 -
Why are metal fans hopelessly stuck in the past??? :(
60 -
BETTY WHITE TOUCHED SLASH’S PYTHON (DON’T WORRY, IT WAS JUST THE TIP)
2780 -
Jumping Darkness Parade: Eyal on Bands That Can’t Duplicate Their Album Live
0 -
Twelve Reasons Babymetal are the Single Best Thing to Happen to Metal in the Past Decade
0 -
Paul Di’Anno: Still a Winner
0 -
Phil Anselmo on Hearing the End of Pantera’s “Hollow” for the First Time: “I Was Floored…”