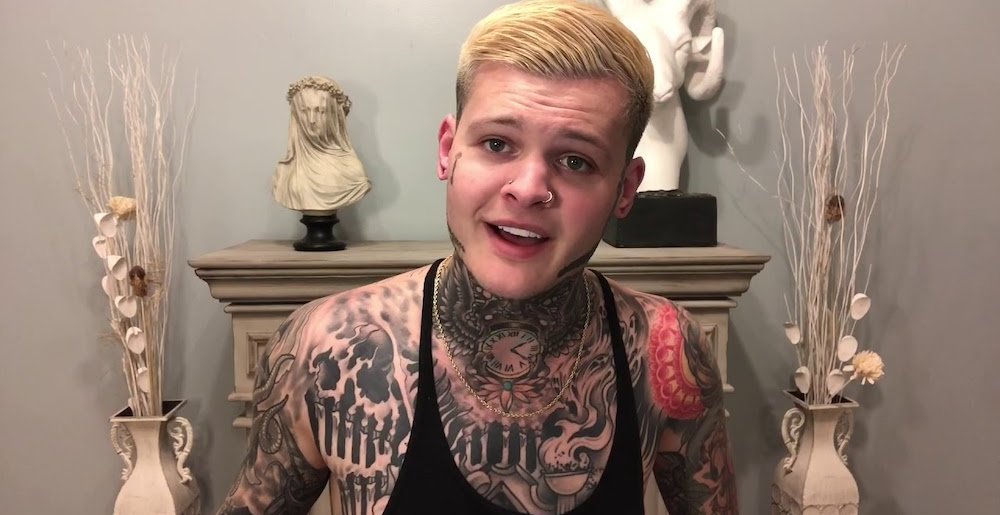 This past December, Lorna Shore fired their frontman, CJ McCreery, following allegations from an ex-girlfriend of emotional and sexual abuse, as well as the use of racist language. At the end of January, Lorna Shore released a new album, Immortal, that included McCreery’s vocals intact. Meanwhile, McCreery has remained silent regarding the allegations…

…until now: the vocalist has released both written and video statements regarding the accusations. The short version is: he denies the claims of abuse against him, but does not even address the charges of using racist language.

You can read/view those below.

“Hey everybody, it’s been a while. I hope everyone is doing well and staying safe out there. I have been absent on all social medias for quite some time now, but today I finally feel ready and strong enough to speak up about the accusations you may have heard about me.

“There are many reasons why I chose to stay silent through everything from the day it all started, all the way up until now. Not defending myself was one of the hardest things I’ve ever had to do, but with how fast everything happened, how quickly the accusations were being spread, and how many people were believing them, I felt that saying anything at all in the midst of everything wouldn’t even matter. I was immediately getting death threats, hateful messages, awful articles being written about me, and so on. I decided it was best for my safety and mental health to unplug from all the negativity and surround myself with family and close friends.

“I want to start by saying that the accusations made against me are extremely serious and I do not take them lightly. I totally get why some people may have read the articles about me and had a very strong negative opinion afterwards but i can assure you that these accusations are all lies and were fueled by my two exes due to being broken up with.

“I do not want to stigmatize anyone for speaking up when they believe something they see or have experienced is/ was wrong. I also am by no means attacking anyone for having mental health issues. I fully support people who want to address toxic and problematic behaviors in others and nobody should ever feel scared or embarrassed to seek help for their mental health issues. With that said, you cannot believe everything you read online posted by someone’s ex.

“I decided to make a video to share what our break-ups were actually about and show the actual texts exchanged at the time of the breakups, along with other crucial texts to help further show that what’s being said about me is false. Ideally, I would not have to do this, but both Nicole and Morgan never responded to my lawyers’ 3 separate attempted contacts reaching out to resolve things privately and I am really not out to get anyone or cause more drama. I just want the truth out there. So here is what happened.

“Nicole and I were on and off for years. When I last broke up with Nicole, it was very upsetting for her. Far from cutting me out of her life for being ‘abusive’ or anything of that nature, when I broke up with her, she was devastated, had nothing but good things to say about me, told me that she had strong feelings for me that she had been hiding, and confessed that hating me was easier than admitting she missed me every time she tried coping with us being apart all of the other times in the past. That coping mechanism became very clear in an extreme way as soon as I started dating someone else. Nicole became spitefully irrational and started falsely characterizing her relationship with me as abusive in an attempt to ruin me and my next relationship. I am still not sure why she hid her feelings from me or would rather hate me than just be honest about our breakup, but once I found out there was an unhealthy imbalance of mixed emotions that were not going to work out, I did the right thing and bowed out of her life on what I thought would be amicable terms. Everything Nicole and I did sexually was 100% consensual, and many times in the past when we were broken up or not on speaking terms, she would continue to contact me, smother me, and ask me to do those particular things with her to either win me back or to just simply hang out with me. I have dozens of saved text messages to that effect but i think sharing any more than what i’ll already be showing in the video would be in poor taste. I am disappointed and very hurt that she mischaracterized our relationship and our break up, but I wish her well.

“I also ended things with my most recent ex, Morgan, due to long distance (and also due to the damper Nicole’s harassment and twitter posts put on myself and morgans relationship). Morgan is an online public figure that makes some of her money through social media. Because of that, Morgan was worried about public perception when Nicole lashed out on twitter falsely labeling me as a sexual/ physical abuser, ect… Cancel culture does not exactly slow down and wait for the facts and unfortunately I was immediately labeled as all of the awful words being pinned on me, so Morgan immediately started to receive backlash just for being in a relationship with me and defending me. As the pressure mounted, Morgan began to reverse course for the sake of publicity. I could not be with someone who would privately tell me that she did not believe a word of what Nicole was saying about me online while she publicly held out a façade of solidarity with people she did not actually believe for the sake of appearances on the internet. When I finally broke up with Morgan and cut all ties for good, it was easy for her to make amends with her detractors by hopping on the cancel culture bandwagon to protect her brand even though she had already told me herself that she did not believe a word of what Nicole was saying and that she never experienced those situations with me in our relationship. Sadly thats where i am today and how all of this started.

“All in all, I was naïve about how much people value perception over facts and how far people can manipulate things online with a handful of Tweets. I learned a lot going through this whole situation. I’ve had a lot of time to think and work on myself. I can fully admit that I am still growing as a person and need to be more careful, mindful of people’s emotions, mental health, and be more selective about who I involvement myself with, but when it comes to the gist of all the variants of extreme “abuser” accusations levied against me, i am innocent and the text messages in my video will speak for themselves. What’s done is done, so all I can do is take it, grow from it, learn from it, move on from this and be the best person I can be. I will continue to learn, grow, and better myself each day and leave all of this behind me.

“I want nothing more than to just simply get back to living a normal life again. This has been an extremely dark time in my life and I can’t fathom going on anymore this way. I hope that this post and my video showcasing the texts will provide some context to change a lot of minds about what has been said about me. To everyone that has been there for me and supported me through all of this, thank you. To everyone who texted me and called me when everything went down to make sure I was okay, thank you. To those that stood by my side and reassured me that things would get better and made sure that I stayed strong, thank you. To those who found ways to contact me via email, letters, snapchat, video game DM’s, and even PayPal to share words of kindness and support, thank you. Every single person who stood by my side and didn’t give up on me, supported me, defended me and believed in me, you are the reason I am still here today and writing this. From the bottom of my heart, thank you.”

Metal Sucks Greatest Hits
0 -
L.A. Band Threatin Faked a Fanbase To Land a European Tour No One Attended
0 -
The formula 4 good music: Generic, but with a gimmick (*please read*)
0 -
I Am The Working Class: The MetalSucks Interview with Fenriz
0 -
Verax’s Terrible “Time Wasters” is a Great Waste of Time
0 -
Someone Made a Lemmy Doll from a Mr. Potatohead
0 -
What Will Happen When a Member of Metallica Dies?