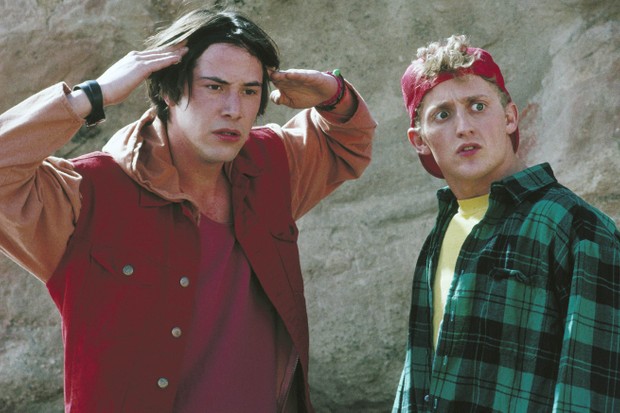 Concerts aren’t the only form of entertainment that got totally f’ed up because of the coronavirus pandemic: the movies have been taking it on the chin, too. And, for better or worse, the latest victim is Bill & Ted Face the Music.

According to Variety, the highly-anticipated return of Wyld Stallyns, will now come out on August 28. Its original release date was either August 12 or August 21, depending on who you ask (every press release in MetalSucks’ inbox lists the date as the 21st, but Variety says it was the 12th).

The move is intended to avoid competing with Christopher Nolan’s latest, the time-bending spy thriller Tenet, which recently pushed its release date from July 17 to July 31 and, finally, to August 12.

Although it may seem bogus to make fans wait just a little longer for B&T3, it’s probably a smart business move; right now the film industry isn’t even confident that people will go to movie theaters once they’ve re-opened… but if they do go, Tenet seems like to crush any competition it may face.

The silver lining: filmmaker, podcast host, and uber-nerd Kevin Smith will moderate a Bill & Ted Face the Music panel for [email protected], the online event that will supplant this year’s San Diego Comic Con. A date for the panel hasn’t been announced, but [email protected] is scheduled to take place from July 23-26. The panel will include stars Keanu Reeves and Alex Winter, natch, as well as fellow cast members Samara Weaving, Brigette Lundy-Paine, and William Sadler, director Dean Parisot, and writers Ed Solomon and Chris Matheson.

Metal Sucks Greatest Hits
1570 -
Frankie Palmeri’s Track By Track Breakdown of the New Emmure Album: A Track By Track Breakdown
0 -
Watch This 10-Year-Old Girl Shred Through Slayer’s “War Ensemble”
0 -
BREAKING: Some Local Band Called Shrapnel are Tired of You Leaving the Show Before Their Set
0 -
Thirty of the Worst Heavy Metal Album Covers of All Time
0 -
Rigged: Luke Hoskin of Protest The Hero
2060 -
How Metal Nerds Choose What Bands To Like: A Scientific Model