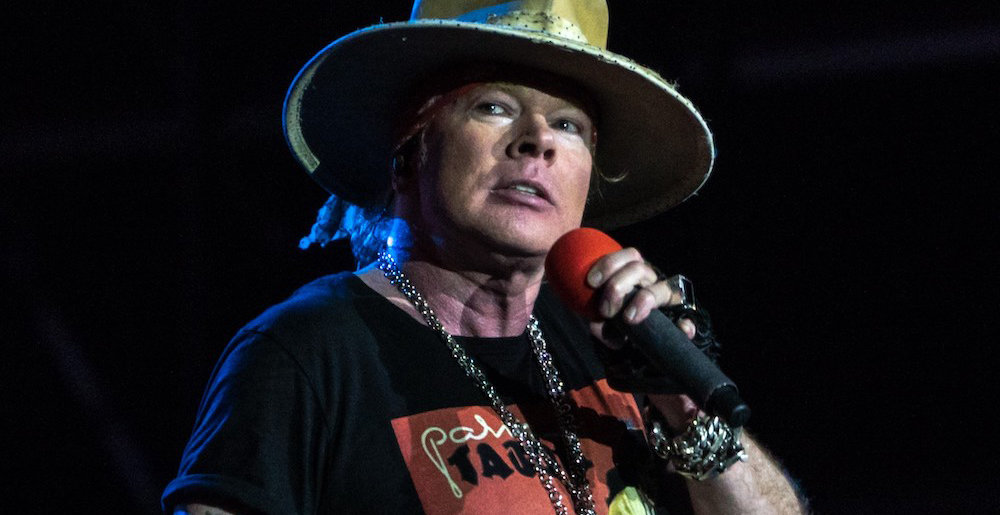 Following the escalation of his second Twitter feud with a high-ranking member of the Trump administration, Guns N’ Roses singer Axl Rose has defended his right to use his substantial platform to express his political opinions.

In case you missed it: over the weekend, United States Surgeon General Jerome Adams gave a televised interview in which he declined to definitively advise people to avoid large crowds for the Fourth of July, instead insisting that “Every single person has to make up their own mind” about whether or not to risk such gatherings. Rose subsequently took to social media to call for Adam’s resignation, calling the surgeon general “a coward” and “a POS” (piece of shit, if that isn’t readily apparent).

Much as U.S. Treasury Secretary Steve Mnuchin responded to criticisms from Rose back in May, Adams, too, offered a rejoinder to Rose:

“Hey Axl – appreciate your passion (and your music). How about helping me save some lives by sharing the message about staying safe, and using face coverings?!”

“Awesome! n’ thanks! U wanna start by telling peeps to avoid large gatherings? Or u want me to? Shame we didn’t get that out there 4 this wkend like on TV.”

Presumably responding to aspersions from ignorant fans who think musicians shouldn’t express their political opinions, Rose then took to TwitLonger to explain why he feels the need to speak out about the ills of the Trump administration:

“My disdain 4 r current administration n’ what I perceive as it’s threat to r democracy is no secret. I’m not all that active w/social media n’ tho I more than appreciate anyone who takes an interest in something I might post I don’t really have an interest in how many followers or retweets etc. I have as my political or social issue posts rn’t about me. They’re about the issues.

“In general my posts in regard to current events, politics or social issues r usually coming from a sense of outrage, obligation n’ responsibility to say something at times when I feel not to is being complicit (as opposed to a desire for attention or self promotion.) I’m nobody, just a citizen that like everyone else has my own opinions n’ believes in my heart that ultimately I want what’s best for not just r country but for humanity, wildlife n’ r environment n’ other’s as opposed to right, left or any other wing fascism r at least in this country free to disagree.

“So 4 me when I feel someone in this administration for example or perhaps media, in entertainment or the public says or does something that in my view supports or caters to the irresponsibility of this administration or various issues w/government or law enforcement I may voice an opinion. Perhaps a strong or perhaps considered by some a lewd or immature response or opinion. It happens.”

Personally, I hope Rose keeps preaching to his 1.2 million Twitter followers — if he can lure even just a few Trump supporters or politically indifferent fans over to the Light Side, it’s worth it. I’m also of the opinion that high-ranking government officials have better uses of their time than feuding with rock stars on social media, especially in the middle of a pandemic. But hey that’s just me. Maybe I’m fuckin’ crazy.