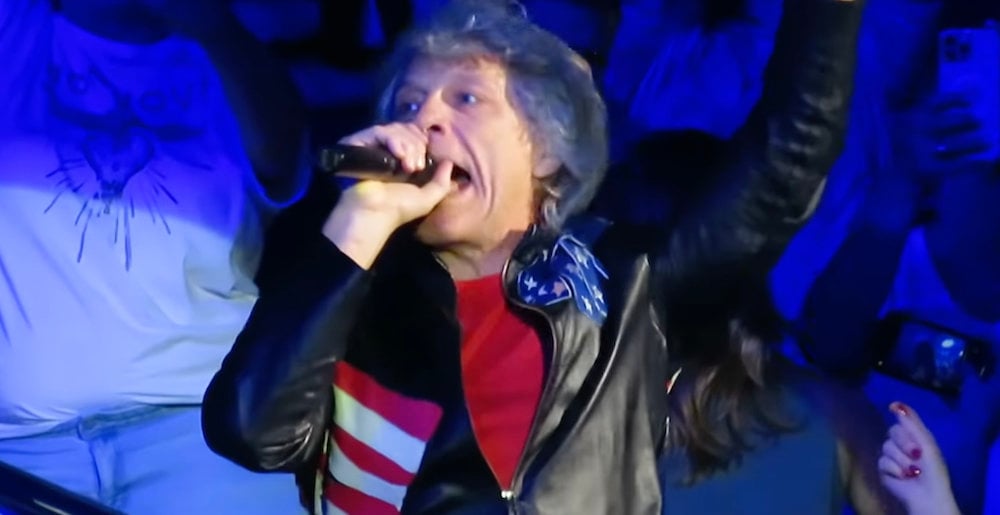 It appears that Bon Jovi frontman Jon Bon Jovi is having pretty significant vocal issues at this point. Last month, we posted a video of him performing the Bon Jovi classic “Wanted Dead or Alive” in which the singer struggled to hit any of the song’s notes. This led other rock stars to be worried about him, including Justin Hawkins of The Darkness, who said that he thinks the people around Jon Bon need to urge him to take a break. Now, video has been posted of the show opener at Bon Jovi’s April 30th gig in Nashville, in which Jon Bon Jovi kicks things off by performing “Livin’ On a Prayer” from the audience — and which further proves that the guy needs to stop and reconsider what’s going on with his voice.

As you’ll see in the video below, Bon Jovi’s Nashville show kicked off with Jon appearing in the crowd and delighting fans by singing “Livin’ On a Prayer.” But the minute Bon Jovi starts singing, it’s obvious that he’s having the same vocal issues that he did before. Simply put, he can’t hit any of the notes, and does a lot of vamping and calling upon the audience to sing the bigger parts as gang vocals. The fact that he’s off rhythm can be explained by him being in the crowd and not onstage with his band, but he’s also clearly unable to hit the right notes and give his vocals any real power.

These videos break my Jersey heart. Slippery When Wet was one of the albums I grew up listening to in Hoboken, so hearing JBJ have such a hard time is a real bummer. But equally a bummer is that people who paid to see the band — and probably paid handsomely, given the size of Bon Jovi as a band — are now being treated to a lackluster show. As a performer, you owe your fans more than that.

Watch the video below. We hope Jon Bon Jovi gets the help he needs, whatever the cause of his vocal issues is.

Sponsored Links from Across the Internet
Show Comments
Related Articles
Worst Week Ever 0
Bon Jovi Mangles Show Opener, Deftones Made Ex-Bassist Feel Like “a Line Item,” and More Top Stories of the Week
May 21st, 2022 at 8:07am Emperor Rhombus

Worst Week Ever 0
Will Smith on Ozzfest, The Darkness’ Justin Hawkins on Bon Jovi, and More of the Top Stories of the Week
May 14th, 2022 at 8:41am Emperor Rhombus

Truly the worst week ever.

This Sucks 0
The Darkness’ Justin Hawkins on Jon Bon Jovi: “The People Around Him Need to Tell Him to Stop”
May 10th, 2022 at 8:44am Emperor Rhombus

“I would ask him to consider canceling the tour and getting some medical attention.”

Metal Sucks Greatest Hits
0 -
Viral Drummer Nandi Bushell Pays Tribute to Taylor Hawkins: “Thank You for Looking After Me”
0 -
BREAKING: Some Local Band Called Shrapnel are Tired of You Leaving the Show Before Their Set
0 -
Eleven Useful Tips for Local/Unsigned Bands
0 -
Editorial: Slayer Should Become Professional Songwriters
0 -
Twelve Reasons Babymetal are the Single Best Thing to Happen to Metal in the Past Decade
0 -
BREAKING: Joey Jordison Back in Slipknot as Percussionist!