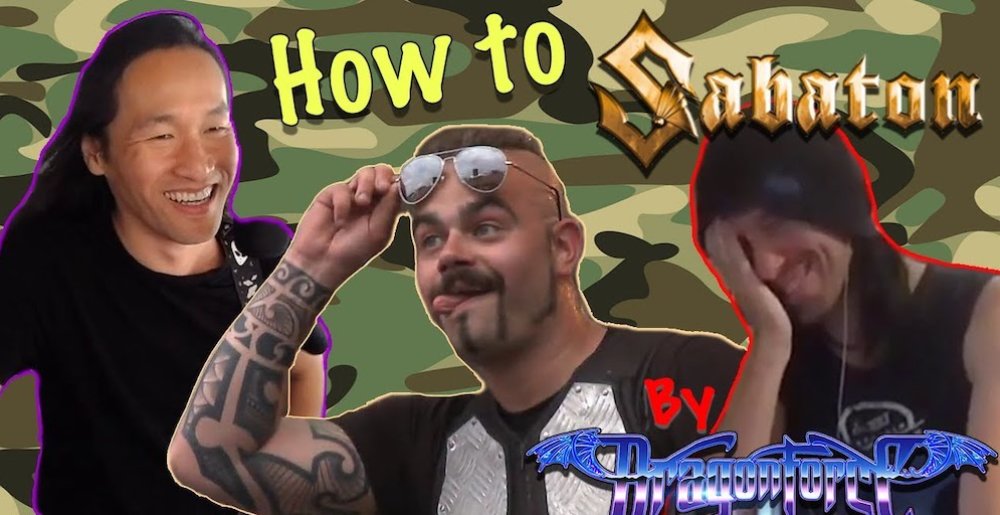 Video: Dragonforce Teach You to Write a Sabaton Song in Ten Minutes

“I could write one of your band’s songs in ten minutes” sounds like an insult. But I legit can’t tell if this new video by Dragonforce guitarists Herman Li and Sam Totman is meant to be snarky or not.

Recorded during a recent Twitch stream, the video sees the Dragonduo professing admiration for Sabaton and declaring the two bands to be “basically friends”…

…but then Li challenges Totman to write a Sabaton song on the fly. “This is much easier than writing a Dragonforce song,” Li claims.

So is the video a diss or not? It’s worth noting that Totman at one point makes reference to an unspecified interview about Sabaton’s first-ever tour was supporting Dragonforce (along with Edguy). Blabbermouth has surmised that the interview in question was one Finland’s Soundi magazine conducted with Sabaton bassist Pär Sundström in 2018. That interview includes this quote, to which the Dragondudes may have taken offense:

“After the tour, we emerged with a lot of newly born Sabaton fans but with empty accounts. It was a different time then, and as we realized later, bands nowadays don’t accept the kind of deals that were offered then. We were also ran over by some management who put a lot of costs on us that maybe we should not have accepted. But it was part of the deal and we were a small band without any power behind for negotiation, so we ended up paying not only our own expenses for the tour but also covering expenses for Edguy and Dragonforce.”

But if Dragonforce’s video is meant as retaliation and not just good fun, well… it’s not as though they’re ever proven wrong about the relative ease with which they can write a Sabaton song: the resulting track does sound like a fairly spot-on parody of “Bismarck,” the Sabaton single from last year.

You can check out the video below:

A super shredding ball of frenetic light, if you blink, you might miss DragonForce’s ballistic ball of guitar-conquering fury, Herman Li.

Metal Sucks Greatest Hits
0 -
The Top Ten YARLERS of All Time
0 -
If You Like Bass Dogs, You’ll LOVE Drum Fish
0 -
Watch This Kid Perform Europe’s “The Final Countdown” Entirely with Hand-Farts
1730 -
Leyla Ford’s Eleven Cardinal Rules of Attending a Concert
0 -
Debunking the Myth that Guitar Hero Made Dragonforce
0 -
12 Embarrassing Albums That Everyone Owned Back In The Day