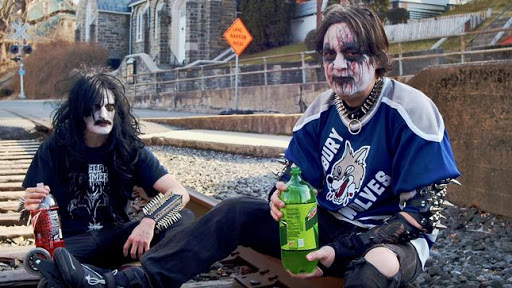 MetalSucks was honored recently when Witch Taint — the groundbreaking project from Lance the King of Black Metal (extreme guitar and vocals) and Matthias Backwards (extreme lead vocals and dark work view) — asked us to debut a video of them performing their song “Viking Heaven” from the safety of their respective lairs. Naturally, we agreed, and set about composing an appropriately epic, not-at-all hyperbolic poem about the video, and all the ways it will change your life forever and make you a smarter, cooler, better person who gets laid constantly.

Take it away, Lance:

“As fitting as it is that our debut album ended up being released in the middle of a global and extremely negative plague, it has greatly cut into our ability to play live or even leave my mom’s basement for that matter. Still, we wanted to give the masses a taste of what’s in store for them once this epidemic passes and we are able to destroy the world with our music instead. It would also be cool to unload all these stickers I ordered right before all this happened. My mom is seriously pissed with how much space they are taking up. Anyway, as for the song itself, it is called ‘Viking Heaven’ and, as hinted in the title, it is about Viking heaven or Valhalla as it is more commonly known in Viking and L.A.R.P-ing circles. It is one of my twelve favorite songs on our debut album Sons of Midwestern Darkness, or ‘album of the year’ as it is known to anyone who has heard it and also your mom. We recorded this version live with no overdubs using futuristic technology and also our iPhones. It is incredible. In fact, I was just watching this video really loud and my mom asked me to turn it down and I was just like ‘No’ even though it pretty much guaranteed she wouldn’t let me borrow her computer later for sassing her like that. It’s that good. You have been warned.”

Check out the “Viking Heaven” performance video below! Sons of Midwestern Darkness is out now on Tee Pee Records, and can should be purchased here. It will change your life forever and make you a smarter, cooler, better person who gets laid constantly. You can thank all parties involved by listening to Lance and Matthias’ recent appearance on The MetalSucks Podcast.

Who knew a black metal video could be this arousing?

Bonnie Raitt’s stoopid-catchy classic gets a dash of ’80s sleaze.

We discuss various slang terms for "taint," their ongoing beef with death metal, why they refuse to do pilates on camera and more.

Metal Sucks Greatest Hits
0 -
Chris Brown Thinks Municipal Waste are a Fashion Statement
0 -
Danny Worsnop is a Good Writer
9660 -
…And F**k You, Too.
850 -
All My Heroes Have Failed Me
0 -
50 Metal and Hard Rock Musicians’ Yearbook Photos
1230 -
Loutallica’s LuLu: The MetalSucks Reviews