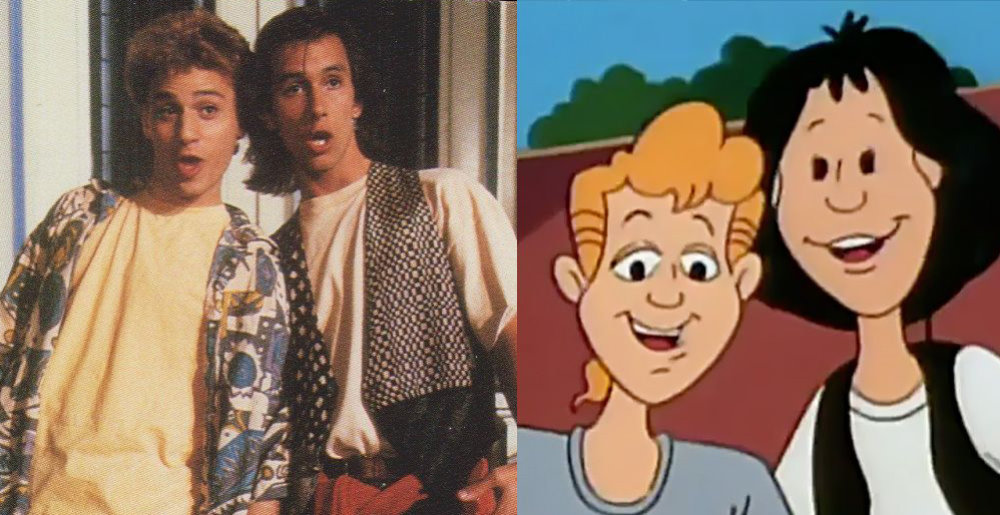 Getting stoked for Bill & Ted Face the Music? In the mood to whet your appetite for the return of one of metal’s dearest duos… but you’ve already watched Bill & Ted’s Excellent Adventure and Bill & Ted’s Bogus Journey a million times already?

Well, maybe this will help: episodes from both the animated AND live-action Bill & Ted’s Excellent Adventures, the two television series that aired from 1990 – 1993.

Bill & Ted’s Excellent Adventures started as an animated series in 1990, and while I’m not gonna lie and you tell it’s great, it’s notable because stars Keanu Reeves, Alex Winter, George Carlin, and Bernie Casey all reprised their roles for the first thirteen-episode season.

But then, in 1991 — shortly after the release of Bogus Journey — the cartoon underwent massive changes. It switched networks, from CBS to Fox Kids… switched creative teams… and, perhaps most notably, lost the movies’ original actors, who were replaced by Evan Richards (as Bill) and Christopher Kennedy (and Ted).

Not coincidentally, Richards and Kennedy were also cast to play the title roles on Fox’s live action series, which lasted seven episodes in 1992. Watching it now, it’s not hard to understand why it failed to catch on.

Will they ever again try to make an episode Bill & Ted series? Uh… let’s hope not, right?

Bill & Ted Face the Music comes out Friday, August 28 on VOD, and in whatever movie theaters are actually open.

Metal Legacies 0
Video: Keanu Reeves on How He Wound up in Anthrax’s “Safe Home” Video
July 9th, 2021 at 3:15pm MetalSucks