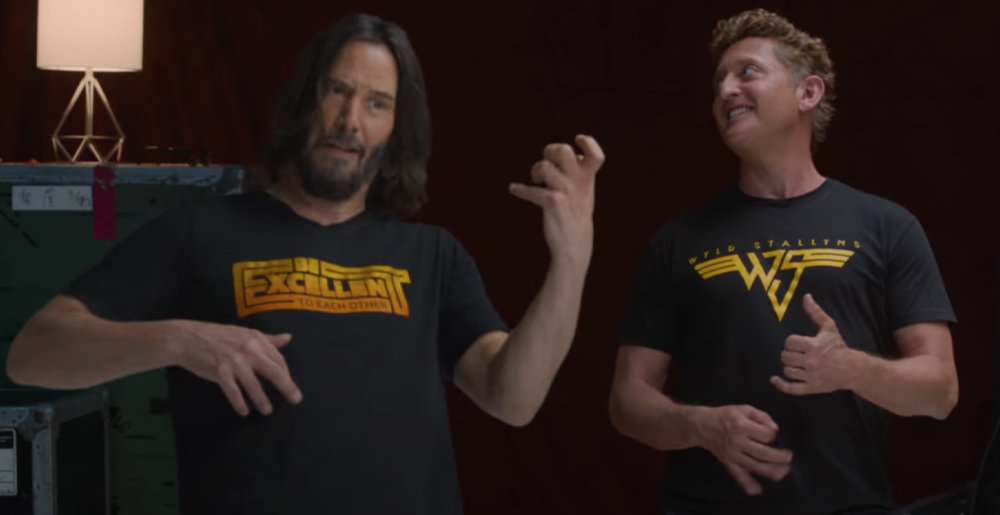 Bill & Ted Face the Music Soundtrack to Include Lamb of God, Mastodon, Animals as Leaders, and More

The Bill & Ted movies are about a pair of lovable (albeit not especially intelligent) metal fans… so it makes sense that metal has always been a cornerstone of the flicks’ soundtracks… and that those soundtracks have always reflected the metal of that era. Bill & Ted’s Excellent Adventure (1989) included Extreme, Tora Tora, and Nelson (billed as ‘Power Tool’ for legal reasons). Bill & Ted’s Bogus Journey (1991) is a bit more diverse, with not just hair metal (Slaughter, Winger), but also thrash (Megadeth), alt-metal (Faith No More, Primus), and a dollop of other stuff (Kiss, Steve Vai, King’s X).

Which brings us to Bill & Ted Face the Music, the eagerly-anticipated third entry in the franchise (not counting the animated and live-action television series). The soundtrack listing for the flick has been announced, and, unsurprisingly, it features new music some of modern heavy metal’s heaviest hitters… specifically, Lamb of God, Mastodon, and Animals as Leaders.

I’m gonna put the track list at the bottom of this post, because some of the song titles are kinda spoilerish… especially the title of Mastodon’s contribution (which suggests there may be a Rogue One-esque element to B&TFTM). So don’t look at that if you wanna go in pure.

What you can do without potentially ruining any surprises for yourself is watch the below video for Weezer’s “Beginning of the End.” It features some footage from the movie, but nothing you haven’t seen in the trailer. It also has a fun cameo from Bill & Ted themselves at the end.

10K Projects will release Bill & Ted Face The Music, The Original Motion Picture Soundtrack on August 28. Pre-order it here. The movie comes out the same day, both on VOD and in whatever theaters are open.

Metal Sucks Greatest Hits
0 -
Who are teh “BIG FOUR SCENE BANDS”????
0 -
For $16,000, Ted Nugent Will Stay the F*ck Away From Your Town
300 -
Sebastian Bach: The MetalSucks Interview
0 -
Comedian Rob Delaney’s Open Letter to High on Fire’s Matt Pike
0 -
BREAKING: Joey Jordison Back in Slipknot as Percussionist!
0 -
Phil Anselmo on Hearing the End of Pantera’s “Hollow” for the First Time: “I Was Floored…”