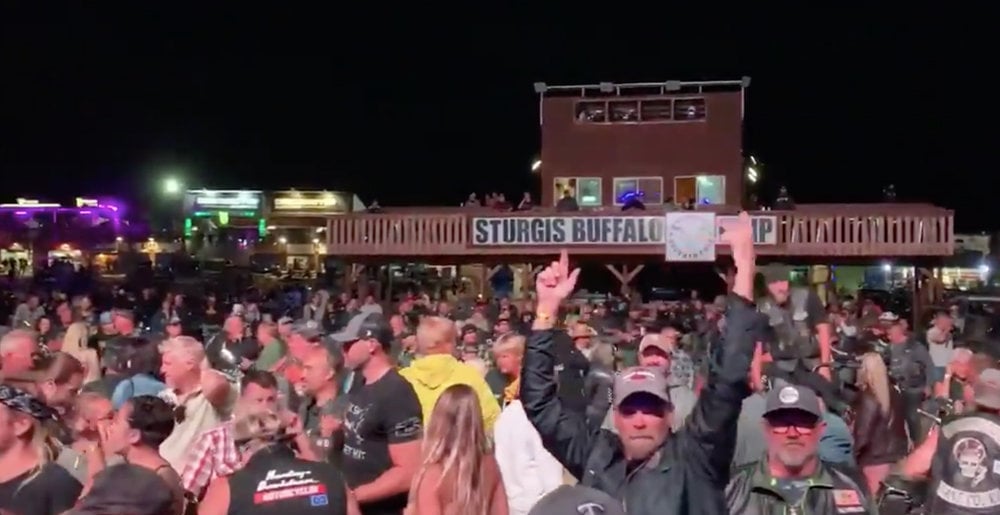 The ten-day motorcycle rally, which reportedly drew more than 460,000 vehicles, included performances by Buckcherry, Trapt, Fozzy, Drowning Pool, Quiet Riot, Smash Mouth, Adelitas Way, Saving Abel, and Night Ranger. Festival goers were not required to wear masks or practice social distancing. Photos from the rally, like the one above, show that most attendees did, indeed, fail to take proper precautions against the spread of the coronavirus.

According to a report by KSTP:

“The state’s health department has received reports from other states that people who traveled from the rally have tested positive, state epidemiologist Josh Clayton said. Contact tracers have been able to work with most people to determine who they were around and may have infected. But the health department has issued public warnings for two bars in the region because they were not able to track all of the people at the bars who may have been exposed to the coronavirus.

“Sturgis is planning to conduct mass testing of its residents next week in an attempt to stem a possible outbreak of infections from the rally.”

Confirmed cases of COVID-19 in South Dakota had already been on the rise prior to the event.

Smash Mouth singer Steve Harwell told the crowd at one point, “We’re all here together tonight. Fuck that COVID shit.” But “A representative for the group” has told NBC that “the band had no further comment.”

Sponsored Links from Across the Internet
Show Comments
Related Articles
New Stuff 0
The New Drowning Pool Song is a Tribute to Dimebag Darrell and Vinnie Paul
August 5th, 2022 at 10:38am Em Shadows