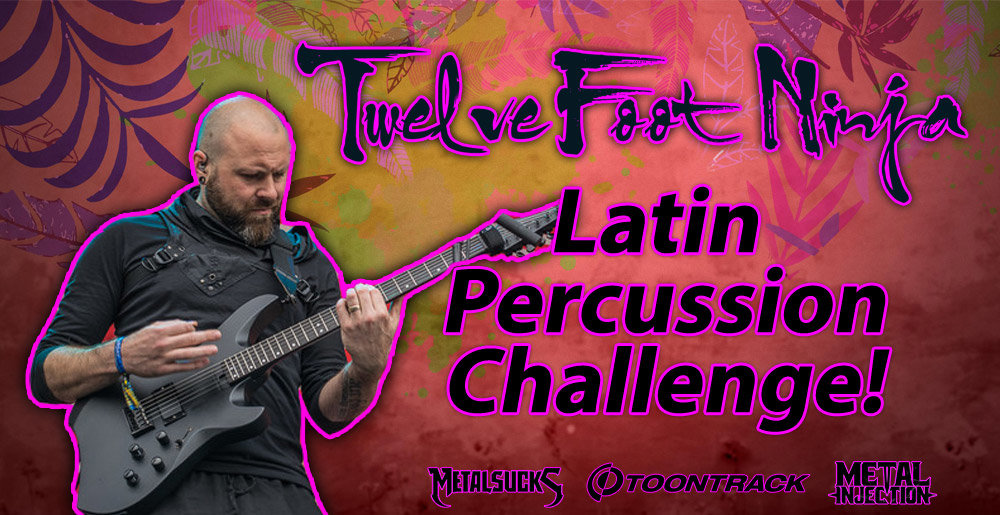 Contest: Sing Your Own Twelve Foot Ninja Song, Win a Bunch of Recording Software from Toontrack!

Twelve Foot Ninja guitarist Steve “Stevic” MacKay is one of those endlessly creative individuals capable of crapping out extraordinary music by accident. And that’s to say nothing of his phenomenal work on the band’s albums, which were most certainly not borne of any accident.

To wit: Stevic recently sat down to fool around with the new Latin Cuban Percussion pack from audio software wizards Toontrack, ended up bringing in the verse from one of the band’s best-known songs, “Coming for You,” rejiggered and reorganized it all a bit, and voila! With some help from TFN co-guitarist Rohan “Ro” Hayes, a new song was born! In typical Twelve Foot Ninja style, it incorporates a whole bunch of influences into one maelstrom that somehow just makes sense; frankly it’s a surprise the band never experimented with Latin rhythms in their songs before this.

Stevic’s genius can now be for your gain: MetalSucks has teamed up with Twelve Foot Ninja and Toontrack for a contest in which we’re asking entrants to write and record their own vocals over Stevic’s new creation. Lyrics, vocal style, melody, composition — that’s all entirely up to you!

One grand prize winner will receive a prize package including:

One runner-up will win a copy of EZkeys plus the Cuban drum pack, and an honorable mention contestant will get a copy of EZdrummer 2.

All you have to do to enter is fill out the form below after recording your own version! Submissions are welcome via Soundcloud, YouTube, Bandcamp or any other platform. Entries will be open until 11:59pm EST on Sunday, November 1. Stevic himself will be judging all entries. Get creative and make ’em good!

First, download the instrumental track by clicking THIS LINK.

And then submit your entry here:

Barker will remain with the band into 2022 and will help them find a new singer.

Contests 0
Heaviest Riff in the Universe: Writing a Song From YOUR Riff! (Video)
December 8th, 2021 at 9:31am MetalSucks

What happens when we take one user-submitted riff and turn it into an entire song?

Metal Sucks Greatest Hits
0 -
Exclusive Interview: Damien Echols of The West Memphis Three on His Life After Death
0 -
New Candidate for Most Metal Wedding Ever: Bride and Groom Shred Down the Aisle
300 -
Free Download for Your Listening Pleasure: NYC Sucks, Volume 2, Featuring The Best of New York City’s Metal Scene
0 -
Etienne Sin: What the Actual Fuck
0 -
Joey Jordison Claims He Was Fired from Slipknot Via a Singing Telegram
0 -
And Now, Here’s a Couple of Dudes Playing Slayer on Pre-School Instruments