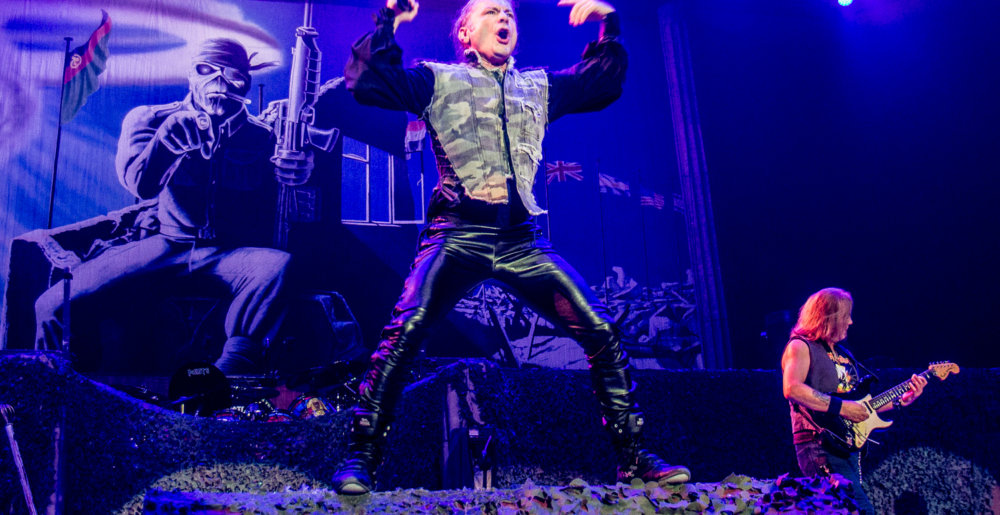 Like most bands who rely on live shows to make a living, Iron Maiden had a ton of touring scheduled for 2020, and we all know what happened with that. But if there’s any good to come out of the massive amount of tour cancelations this year, it’s that a lot of bands have gotten to work on writing new material sooner than they otherwise would have, and you can count Maiden among them.

In a new video message from vocalist Bruce Dickinson, Maiden’s resident commercial jetliner pilot revealed that he’s been working with bandleader / bassist Steve Harris on some new material, along with offering various other band-related platitudes.

Maiden were rumored to be in the studio last year leading fans to speculate that a new album would come out in 2020, but it’s all but certain that won’t be happening at this point.

Meanwhile, the band just announced the release of a double live album to tide fans over. Nights Of The Dead, Legacy Of The Beast: Live In Mexico City was recorded across three sold-out shows in September of 2019, and will come out on November 20 via Parlophone Records. You can get your hands on a copy here.

Here’s what Bruce said in his latest update:

“We’ve all had a bit of a torrid time — everybody in the whole world, Maiden included. We wanna be out on tour.

“A lot of things haven’t happened this year — that’s blindingly obvious — and it’s very, very frustrating. However, we do have plans. In the meantime, what are we doing? Well, we’re doing bits of writing. I’m talking to Steve. We’ve been working together a little bit in the studio. On what, I can’t tell you, ’cause they’d have to kill me.

“All our crew are all on board with us. Obviously, after the cancelation of the shows and rescheduling of the shows this year, all of our lives were canceled. The killer crew is still on board for when we resume normal service next year, whenever that is.

We will, naturally, keep you apprised of any new Maiden music, which would be the band’s first since The Book of Souls in 2015.

Metal Sucks Greatest Hits
30 -
Exclusive: Burzum Launches Clothing Line
1510 -
The Top 15 Reasons that Metallica are the Yankees of Metal
0 -
Rigged: Testament Guitarist Alex Skolnick
0 -
Someone Made a Lemmy Doll from a Mr. Potatohead
0 -
It’s Time to Stop Thinking of Women in Metal as WOMEN in Metal
0 -
Rigged: Wintersun