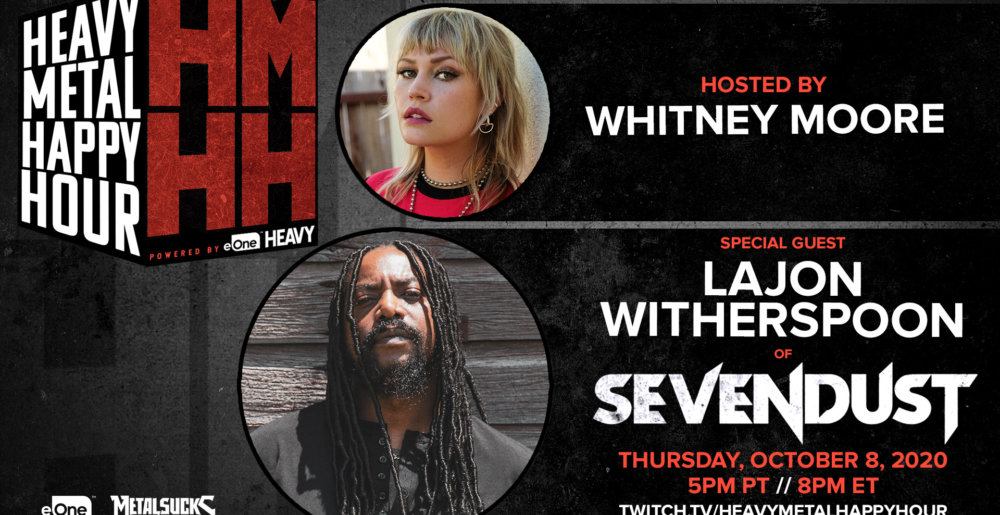 Our Heavy Metal Happy Hour livestream series returns after a one-week hiatus this Thursday, October 8 (and every Thursday night) with special guest Lajon Witherspoon of Sevendust!

Whitney and Lajon will talk Sevendust’s upcoming album, Blood & Stone, catch up on Lajon’s life of late, and whatever the heck else they want as Whitney spins metal tunes while fans ask questions and chat with Lajon and one another. If we’re so lucky, we’ll even be able to preview a brand new Sevendust tune for you all ????

Tune in to Heavy Metal Happy Hour via Twitch on Thursday, October 8, at 8pm EDT / 5pm PDT! The broadcast runs for an hour. Don’t be late! And don’t forget to bring something delicious and alcoholic to drink!

Here’s a clip of the fun we had with The Black Dahlia Murder’s Trevor Strnad last week:

Metal Sucks Greatest Hits
0 -
Hallowed Be Thy Game: Brütal Legend is a Love Letter to Heavy Metal
1480 -
Being in a Band is for Losers [Scientific Proof]
0 -
G.O.A.T. and Your M.O.M.’s “Quack like a Duck” Justifies Humanity’s Entire Existence
0 -
Rigged: Testament Guitarist Alex Skolnick
0 -
This Dude Sounds EXACTLY Like Layne Staley
0 -
Let’s Gossip About How Much Money Famous Metal Vocalists Make