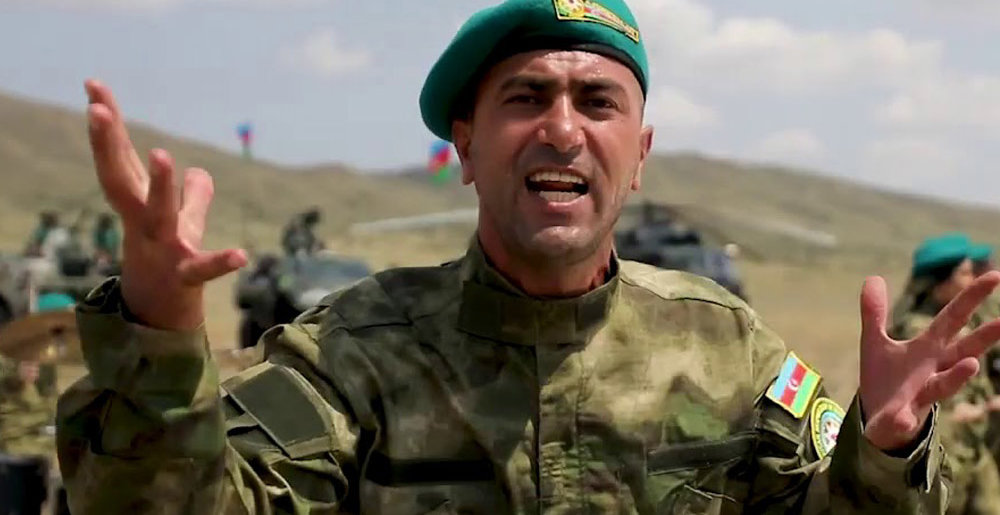 The Ministry of Defense of the Republic of Azerbaijan and the State Border Service (the Azerbaijan law enforcement bureau that does exactly what their name suggests) have released “Atəş” (“Fire”), a heavy metal propaganda song intended to hype up the country’s military forces.

Those forces are currently engaged in battle with Armenia over control of Nagorno-Karabakh (Artsakh). Although Nagorno-Karabakh is located within and internationally recognized as being Azerbaijani, it is “populated and controlled by ethnic Armenians, and aided by the Armenian diaspora,” according to CNN. Armenia assumed authority over the region following a ceasefire agreement in 1994, but Azerbaijan has long vowed to reclaim power. Azerbaijan is currently aided by Turkey, who engaged in Armenian genocide from 1915 to 1917.

The video for “Atəş” — which was performed by Ceyhun Zeynalov, Narmin Karimbayova, and the Nur Group — uses archival footage of the Azerbaijani military to present an intimidating, faux-inspirational image of those armed forces.

You can watch the video below. An English translation of the lyrics was not available at press time.

Last week, System of a Down condemned the “petro-corrupt Azerbaijan” for “war mongering, ethnic cleansing, and killing of innocent civilians.” You can read the band’s entire statement here.

Tags: Azerbaijan, Ceyhun Zeynalov, Narmin Karimbayova, system of a down, the nur group