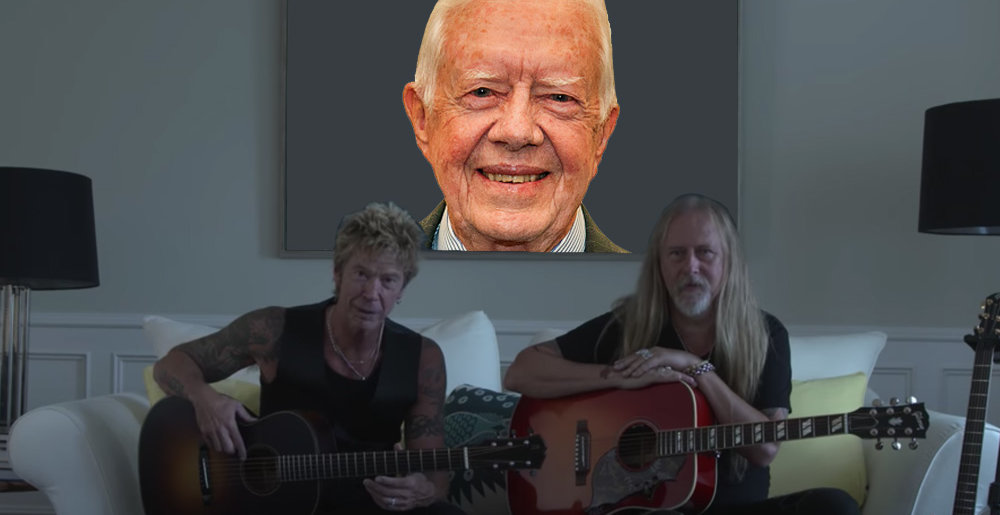 Former U.S. president Jimmy Carter turned 96 last week. Asked what he’d like for his birthday, Carter replied, “The sweet release of death.” Nobody in his family actually likes him, though, so instead they got two guys he’s probably never heard of from two bands he’s probably never listened to to cover “A Satisfied Mind,” the song written by Red Hayes and Jack Rhodes and popularized by Porter Wagoner. Happy birthday, Jimbo!

A statement accompanying the video reads:

“Duff McKagan & Jerry Cantrell would like to wish former president Jimmy Carter a happy 96th Birthday and highlight all he’s done to help create a sustainable future for mankind! From putting solar panels on the roof of the White House to pioneering the growing of Empress (Paulownia) trees…which happens to be the wood Duff’s guitar is made from in the video. Enjoy!”

Wait, Duff’s guitar is only made from Empress trees in the video? What is it made out of in real life? Does it magically switch back and forth between two types of wood? How does it know when it’s being filmed? I have so many questions!

While I ponder those questions, you can watch the video below.