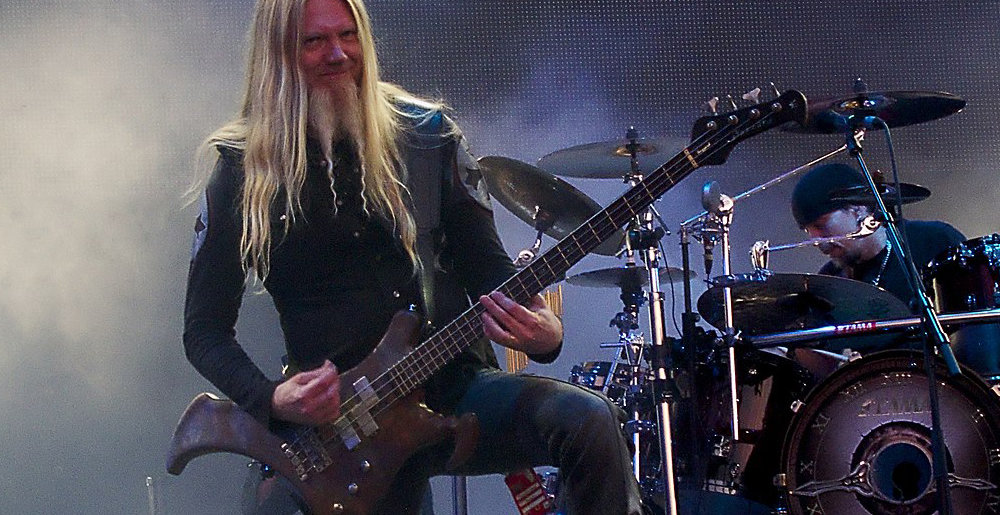 Marko Hietala has announced that he’s “leaving Nightwish and my public life.”

In a statement , the bassist/co-vocalist cites disillusionment with the state of the music industry and a “need to find some new reasons and inspirations” for his work as the cause of his departure from the band. Notably, he makes reference to Nightwish’s song “My Walden,” which is itself a reference to Thoreau’s book about returning to nature, “to live deliberately, to front only the essential facts of life, and see if I could not learn what it had to teach, and not, when I came to die, discover that I had not lived.”

He also semi-jokingly expresses hope he’ll get to chill with Tony Iommi.

In their own statement, the remaining members of Nightwish say that upcoming tour dates will include a session bassist to “be announced at a later date.”

Hietala joined Nightwish in 2001, and has appeared on all of the band’s albums since 2002’s Century Child, including last year’s Human. :II: Nature..

You can read both statements below:

“Dear people. I am leaving Nightwish and my public life.

“For a quite a few years now I haven’t been able to feel validated by this life. We have streaming company big guns demanding 9/5 work from artists of inspiration while unfairly sharing the profits. Even among the artists. We’re the banana republic of the music industry. Biggest tour promoters squeeze percentages even from our own merchandise while paying dividends to Middle East. Apparently some theocrasies [sic] can take the money from the music that would get you beheaded or jailed there without appearing as hypocrites. Just a couple of examples here.

“This past year forced me to stay home and think. And I found myself very disillusioned about these and a lot of things. I found out that I am in need of that validation. For me to write, sing and play, I need to find some new reasons and inspirations. ​’My Walden’ so to speak. And it’s even in my book that I’m a chronic depressive. It’s dangerous for me and the people around me, if I continue. Some of the thoughts a while back were dark. Don’t worry, I’m fine. I have my two sons, a wife, the rest of the family, friends, a dog and lots of love.

“And I don’t think that I’ll be gone for good.

“Conspiracy is the word of the day. For the people who like them I need to say that my 55th birthday is now on 14th of Jan and I’ve certainly done my time for now. Blaming for instance Tuomas is an insult to both him and my free thinking. This is a very sad thing to all of us too. Have a care please.

“But of course now we’ll know, if some go there on purpose.

“There are a couple of things agreed on that I will do on 2021. Otherwise I kindly and with respect ask the media, bands, artists projects etc. to not ask me for anything within the next year. I have some reinventing to do. I hope to tell you about it on 2022. It’s not a promise though.

“I am so sorry about this.

“P.S. Tony Iommi is an exception to the ​‘no contact whatsoever’. Childhood hero takes a precedence.”

“Marko’s resignation has left us with some difficult decisions and choices to be made. After much thought and consideration, we have, in mutual understanding, decided to perform the upcoming ‘Human. :II: Nature.’ world tour as planned, but with a session bass player. The live line-up will be announced at a later date.

“We respect Marko’s decision and wish him all the very best. We will not comment any further.”