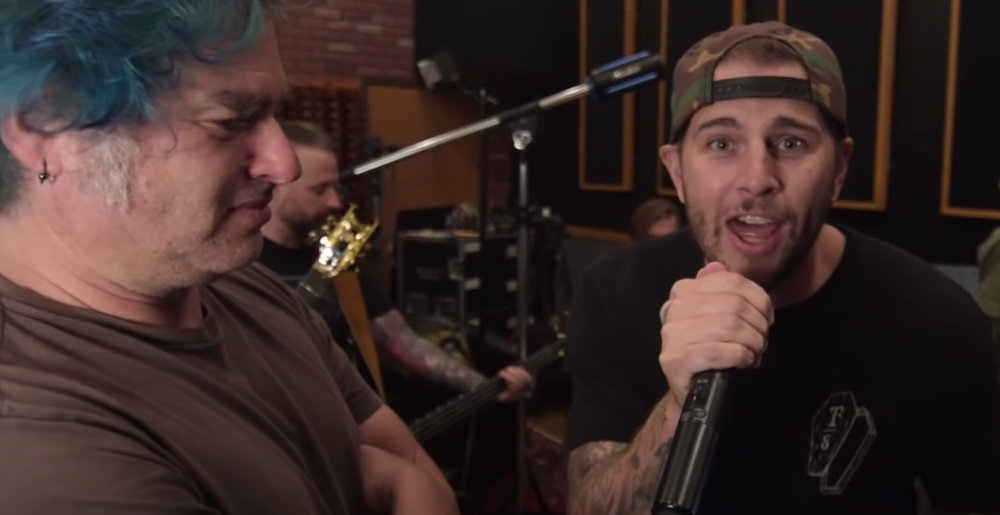 “[A]fter talking shit about Avenged Sevenfold for years, I played golf with their singer Matt Sanders [a.k.a. M. ‘Shadows’] yesterday, and we get on great. We have a new song they play on. That’s a funny marriage of two bands, but it works – unlike most metal bands, they’re sweet guys, and not full of themselves.”

Do you hear that, most metal bands? You’re NOT sweet guys, and you’re totally full of yourselves. FAT MIKE SAYS YOU NEED TO GET YOUR SHIT TOGETHER.

The collaboration (NOFA7X?) that resulted from Fat Mike and M. Shadows shooting eighteen holes together is actually a new version of an old song –“Linewleum,” an update of their 1994 song “Linoleum.” Explains the man celebrated in Spain as Gordo Miguel, in France as Gras Michel, and in Alabama as Regular-Sized Mike:

“One night I stayed up till 4 a.m. checking out all the different versions [of ‘Linoleum’] on YouTube. Watching hundreds of bands from over 28 countries (mostly Indonesia) doing ‘Linoleum’ was a humbling experience for me. So I decided to write a song that was a shout-out to all those people that learned those four chords and remembered the non-rhyming lyrics. Then I asked the biggest of all the bands (Avenged Sevenfold) to play some leads on the song. Then M Shadows suggested we do a video together. Then I figured I should put all of the bands in the video. Well, I couldn’t fit all the bands, but I picked a bunch of cool ones! A song about not playing a song that’s not a hit song with a video about other bands covering the song! This is why I love punk rock [and] writing punk songs. Rules out the door!”

The resulting video is actually pretty entertaining. You can check it out at the bottom of this post. The track will appear on NOFX’s forthcoming release, Single Album, which comes February 26 via Fat Wreck Chords. You can pre-order it here.

Funny enough, The Black Dahlia Murder’s Trevor Strnad told us in 2019 that he’s a big NOFX fan; BDM aren’t featured in this video, but they were recently talking on Twitter about covering “Linoleum,” which is quite the coincidence.

If only Trevor played golf…!

Wouldn’t most bands kill to be in the same sentence as Metallica?