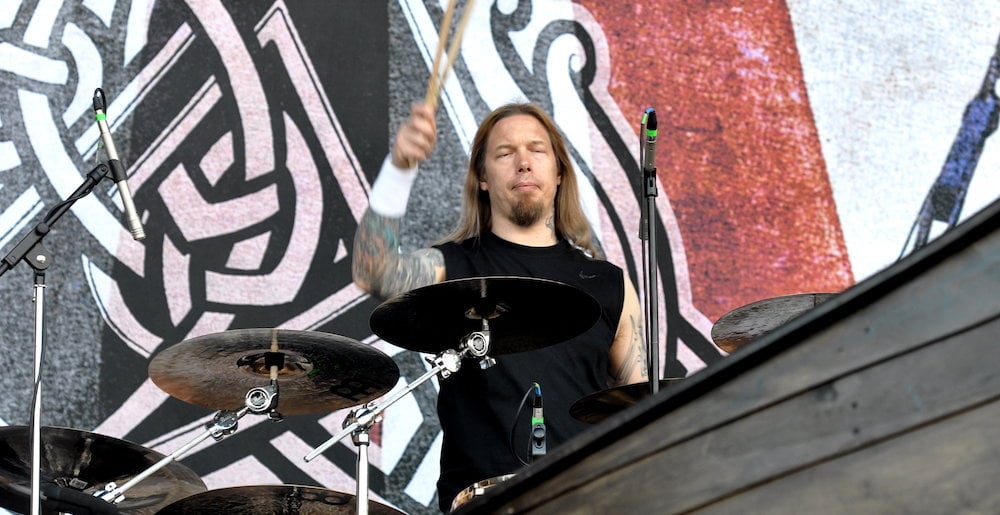 Ex-Amon Amarth drummer Fredrik Andersson, who drummed for the band from 1998 through 2015, has issued a lengthy public statement in which he apologizes to his former bandmates for causing them “grievance,” explaining in detail the battle he waged to hold on to what he perceived as his rightful songwriting credits after leaving the band. While the statement for the most part comes off as a mature piece of self-introspection, it’s not without grievances of its own, and Andersson couldn’t resist a little zinger at the end, specifically calling out Amon Amarth frontman Johan Hegg as a “liar” for comments leveled at him in the press.

A quick recap: Andersson, who played on every Amon Amarth album through 2015 save for 1998’s Once Sent from the Golden Hall, exited the band that year to the surprise of fans. Jocke Wallgren of October Tide and Valkyrja replaced him. A few years later, presumably after a legal decision had been handed down, Andersson took to Instagram to call his former bandmates “backstabbing” and accused them of kicking him out so they could divvy up his share of rights between them, estimated to be around $15,000/year. “Enjoy your millions and your ‘victory’,” he posted. “Hope it’s worth unfriending a colleague for 17 years.”

Andersson’s latest post is much more measured and conciliatory in tone (for the most part), and explains the backstory a bit. And it’s one as old as time itself: he was asked to join the band as a full-time member and an agreement was eventually reached to split all income equally, although it was never written down and codified legally, he says (bands reading this: taking note?). When he left the band, he claims, the band re-negged on that agreement, stripping him of his shares. While he claims he’s at peace with it now, the post is not without some sour lemons, particularly the issue with Hegg.

Also of note: the members of the band all kept day jobs until around 2008 when they became successful enough as a band to quit, way later than I reckon most folks would’ve thought.

“This will be my final post on the Amon Amarth issue, and it’s a positive one for me as I have come to a realization. I wrote to the members (got no reply) but want to close the book also publicly. As Einstein said, if you expect a different result you have to try a different approach.

“Backstory: After The Avenger [in 1999] we had a deal that we would share everything equally. We shared all money equally so that it would never be a fight about who would have their songs on the album (on the avenger the split was 100% music to Olli [guitarist Olavi Mikkonen] and 100% lyrics to [singer Johan] Hegg). The idea was that the best material would always end up on the albums no matter who wrote it. Unfortunately most (not all) of my riffs and ideas were rejected, but with this deal it didn’t matter so much to me, and they were obviously rejected cause they were not good enough.

“Five years ago, after a year of fighting about royalty shares, publishing, rights and them asking for a non-disclosure, we sat down with our lawyers trying to come to an agreement. I tried to claim my 20%, but I could not prove which songs I had actually written – the drums are not legally part of the music -hence I lost my share of the rights and had my name removed as songwriter. They did offer me to keep my share of the songs I had written riffs for but being so few I told them to keep them too. I don’t regret that, but I have to confess I never expected them to actually go through with removing me. They did.

“Why I felt entitled to my share: I was never ‘hired’, I was asked to join the band when there was no income. There was no business. In fact the first five or so years in the band there was no income. The years 1999-2008 my average yearly income was $15000/year due to low income and lost income from my day-job because of time off for tours etc. No one in the band made big cash. This was the reason we could not record fate of norns together as a band; no one of us could afford to take three weeks off from work if we wanted to also tour on the album.

“In 2007 we registerred our business, and started ‘making it’ around 2008. (With an average $30.000 yearly income) The band progressively got bigger from there on bit we kept a rather low payout and invested alot of our earnings back into the band. One could argue that the shares I claimed would be compensation for lost income/lost pension during the early years. And one could argue that my share from those albums are pretty small compared to what the band makes now. But me and the other members obviously have different opinions about this. Their standpoint is that we never actually said that any member would get to keep their shares of the music rights if they are no longer in the band. This is true, we never did.

“We also never said we WOULDN’T get to keep the shares after a departure. This is something I assumed. Both these facts are true, but they can’t co-exist. So, I will back down now.

“At one point I will know for sure as they will have to adjust their shares too if anyone else of the four members leaves the band or when they collectively retire. If they don’t it will be obvious that they just wanted to rip me off of my share. But time will tell if they will get to keep their 25% each -for life- (and 70 years after death). Being the youngest I guess I’ll outlive them. Until then, I give them the benefit of the doubt.

“So, with all that being said and my final airing of the issues; I apologize to the members and to the fans for the grievance I have caused fighting a lost case. It was wrong of me to assume I should get to keep my share. I’m now closing the book and I wish the band a continued great success.

“Please remember that my anger was never about losing my spot in the band, that has never been the case. I’m glad to not be in the band anymore, and I will gladly never be a part of it again. (Sorry to any fans wanting otherwise, but I think Jocke deserves all the attention he gets and I wish him all the best!)

“I’m only disappointed it ended the way it did, and realize it could have ended differently if I had admitted being wrong earlier. Albeit that would’ve been to an even greater economic loss for me.

“I will not, however, apologize for calling Johan Hegg a liar. The things he said about me in Sweden Rock Magazine are not true, and he has yet to apologize to me about it.”

I’m incredibly curious to hear Amon Amarth’s side of this issue, as such disputes are rarely as simple as one side paints them out to be. Was there something Andersson did or said that made the band feel justified in taking his shares? Is the way Andersson presented it above not the way it happened? Are facts missing? Something else entirely? We’ll likely never know.

Amon Amarth’s most recent album, Berserker, came out in 2019 and is available to stream and purchase here.

Now THAT is a line-up!

Metal Sucks Greatest Hits
0 -
Video Footage of Emmure’s Frankie Palmeri Getting Electrocuted On Stage in Russia
0 -
Chad Kroeger and Avril Lavigne Finally Wrote a Song So Awful that the Internet Has Collectively Rejected It
0 -
Detailed Analysis: Vest Metal is Officially the Next Annoying Trend in Metal
1350 -
Oceano Prove That Deathcore Has Depths
0 -
Heavy Metal Kitten Covers
0 -
Phil Anselmo on Hearing the End of Pantera’s “Hollow” for the First Time: “I Was Floored…”