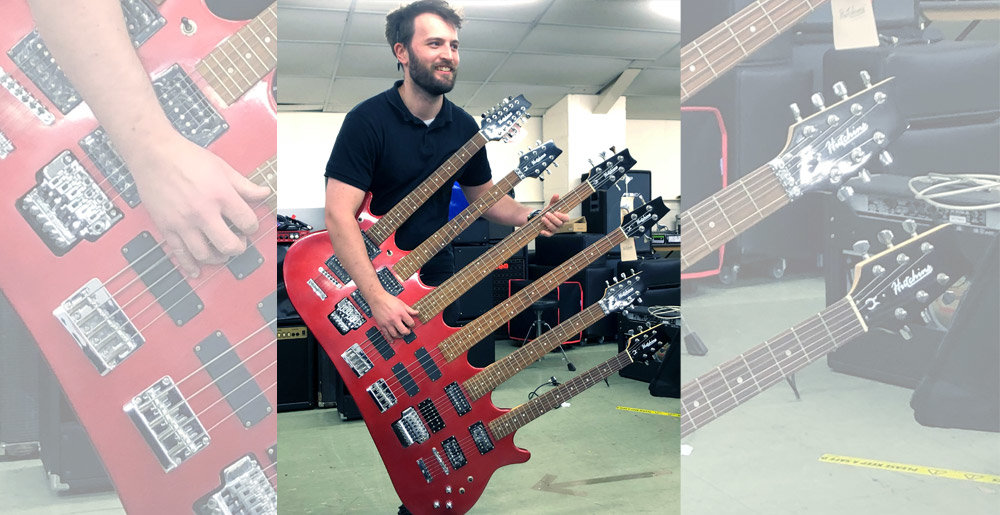 Rare Six-Necked Guitar ‘The Beast’ Goes Up for Auction

Why does this guitar have six necks? Why would someone ever need a six-necked guitar, let alone be able to hold it comfortably, let alone play it?

Such questions are unimportant! What you need to know is that this unique piece of history will soon be up for auction, and it can be yours, all yours!

The guitar, one of only a handful ever made, is called ‘The Beast’ and features six guitars in a single body. According to its creator, Gary Hutchins, it was the guitar that should never have been built! It’s got two standard six-string axes — one with a Floyd Rose tremolo and one without — a seven-string for the shredders, a 12-string for the cowboys, and two basses (a four-string and five-string) for the low-end slingers. No matter your live performance needs, you’re covered… you can be your own one-person band!

Adrian Beeby, Director of Communications at Ellipsis, the agency handling press for the auction, tells MetalSucks that The Beast is expected to fetch between £1,500 and £2,000 when it and hundreds of other guitars are auctioned at Gardiner Houlgate specialist music auctioneers in Wiltshire, the county in southwest England best known for Stonehenge, on Wednesday, March 10.

Also going under the hammer is the guitar used by Prince on his classic 1991 album, Diamonds and Pearls. You can have a look at all the guitars that will be up for auction on March 10 right here.

If a MetalSucks reader wins the auction we promise to post any and all photos and/or videos you send us of you playing metal riffs on The Beast, complete with plugs for your band. Now get to bidding!

Sponsored Links from Across the Internet
Show Comments
Related Articles
Interviews 0
Jackie Parry of Dianthus Dishes on the Rise of Women in the World of Guitar, New Music, and More
January 24th, 2023 at 2:58pm Wolfie von Eyezen