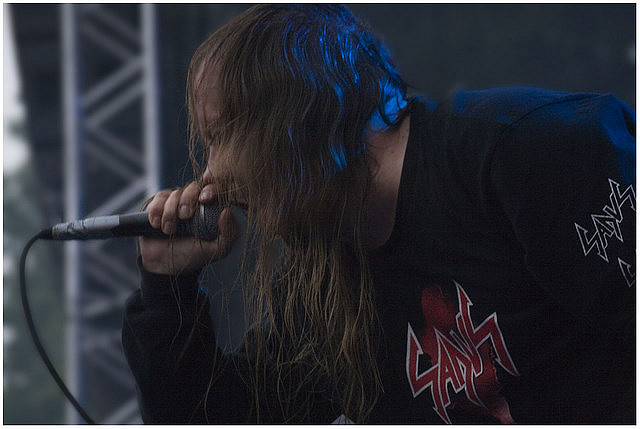 Entombed vocalist and co-founder Lars-Göran “LG” Petrov has passed away, his bandmates announced this morning. He was only 49 years old and died after battling bile duct cancer.

Petrov revealed last August that he had been diagnosed with bile duct cancer and had already “been battling it for some time now,” labeling it incurable but saying he had been undergoing chemotherapy treatment. Petrov launched a GoFundMe campaign at the urging of Slipknot drummer Jay Weinberg and metalheads were quick to rally around it, donating a very metal 666,000 SEK (around $77,500 USD) to assist with medical and living expenses. Petrov also received a boost from Converge, who donated 100% of the proceeds from their 2013 Entombed tribute EP, Pound for Pound: The Wolverine Blues Sessions.

“We are devastated to announce that our beloved friend Lars-Göran Petrov has left us.”

“Our brother, leader, vocalist, our Chief Rebel Angel went on another ride last night. It’s with the deepest sadness that we have to announce that Lars-Göran Petrov has left us. He was (is!!!) an incredible friend, and a person that has touched so many people. He has changed so many lives with his voice, his music, his character and his unique personality. LG’s smile is something that we will carry forever in our hearts. When asked in an interview what he would like to have written on his grave and what about his legacy, he said: ​’I will never die, it will never die.’ And you didn’t. You will live forever in our hearts. ⁣⁣⁣⁣

Petrov got his start as the drummer of the band Morbid, which also featured Mayhem vocalist Dead. In 1987 he joined Nihilist, which re-branded later that year as Entombed with most of the same members. His vocals would appear on every Entombed album save for 1991’s Clandestine, all of which are widely credited as pioneering death metal releases that would go on to directly influence many of the so-called “Swedish OSDM” (“Old School Death Metal”) bands of the past 10 or so years.

In 2014, Petrov found himself in a legal battle over the rights to the Entombed band name with former members Uffe Cederlund and Nicke Andersson. While those members won the lawsuit, Petrov would continue with his own version of the band featuring then-current members under the Entombed A.D. moniker, and would go on to release three more albums. Bowels of Earth, released in August of 2019, would be his last.

Additionally, Petrov released three albums with the death metal supergroup Firespawn, the last of which, Abominate, also came out in 2019.

R.I.P. to a great one. Crank Entombed all day today! On behalf of everyone at MetalSucks, we wish Petrov’s family, friends and bandmates all the best.

Examining the legacy of At the Gates’ debut album on its 30th birthday.