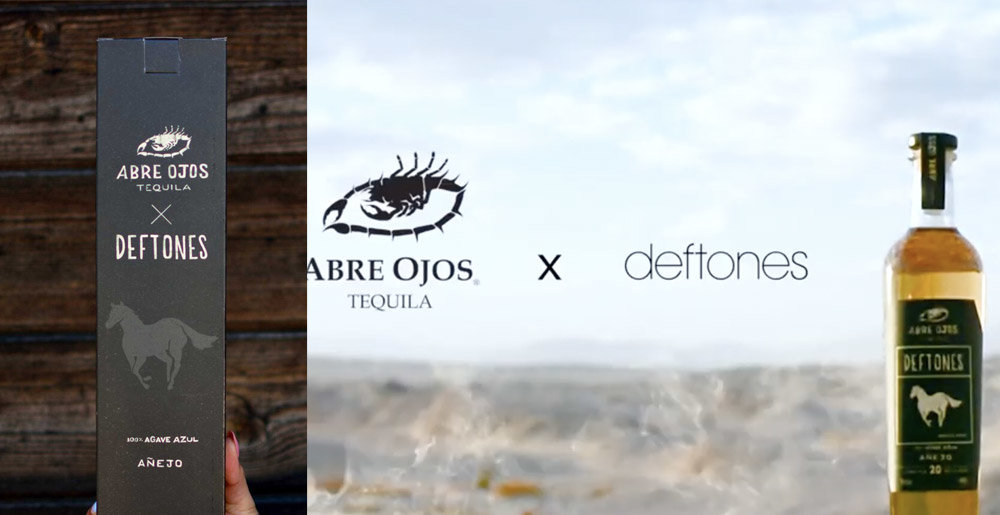 Deftones have long been in on the beer game, teaming up with Belching Beaver on a number of brews including the Phantom Bride IPA, White Pony Double Dry Hopped IPA, Swerve City POG IPA, Good Morning Beautiful Brown Ale and Ohms Pale Ale. I don’t even think that’s all of them.

Now they’re getting in on the liquor game, too, with a White Pony-themed tequila celebrating the iconic album’s 20th anniversary and distilled in collaboration with Abre Ojos Tequila. The spirit will be available starting on March 15 in a very limited quantity of 2,880 bottles.

“Continuing our White Pony 20th year celebration, we are very excited to share that our #WhitePony tequila, in collaboration with Abre Ojos Tequila, is hitting retailers this Monday, the 15th. With notes of caramel, vanilla and toasted graham cracker, only 2,880 bottles of this special ‘Anniverario’ añejo have been produced. Our tequila will be available in CA, TN, NY, PA, DE, MA, CT, MD, D.C. and also online for additional states. Visit abreojostequila.com for more information, and to find a distributor near you. Saludos!”

That link: right here to buy it online. You can also check out a brief video trailer of the product below.

The band recently released Black Stallion, an album consisting of special guest remixes of every song on White Pony, also in celebration of the 20th anniversary.

Metal Sucks Greatest Hits
0 -
Nazi Imagery: Why Watain and Marduk Don’t Get a Pass While Slayer and Metallica Do
0 -
It’s Official: There is Too Much Slayer Merchandise
2760 -
Who Are The Top Ten Lyricists?
0 -
Slipknot’s Corey Taylor Shares Photo of “Post-Gig Make-Up Debacle” Beneath His Mask
0 -
Exclusive Interview: Lamb Of God Drummer Chris Adler on Randy Blythe’s Imprisonment, Upcoming Tour and the Future of the Band
0 -
Science Explains How Metal Singers are Able to Scream Without Damaging Their Vocal Cords