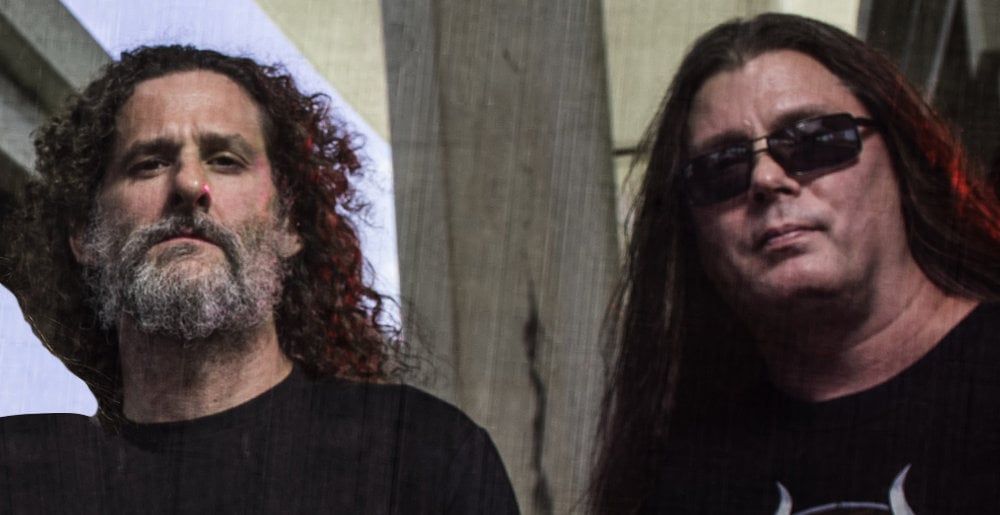 There’s a big mystery surrounding Cannibal Corpse’s forthcoming album, Violence Unimagined, and that mystery is this: why didn’t guitarist Pat O’Brien return to the fold?

O’Brien, you’re likely aware, was arrested and charged with burglary and aggravated assault in late 2018. Authorities were reportedly called to the guitarist’s home in Northdale, FL after it “caught fire with exploding ammunition inside.” While firefighters struggled to put out the fire despite the exploding ammunition, O’Brien allegedly entered another person’s home nearby, where he reportedly pushed a woman down and then hid in the backyard. Authorities were eventually able to subdue O’Brien with a taser after he came at them with a knife. Over 80 firearms and thousands of rounds of ammunition were found in his home, including what were described as “military-style flamethrowers.”

Soon after, O’Brien appeared in court in an anti-suicide vest and shackles. The judge set his bond at $50,000, pending the results of a drug test, and O’Brien was eventually released. Deana Mazurkiewicz, wife of drummer Paul Mazurkiewicz, launched a crowdfunding campaign to raise funds on O’Brien’s behalf. In an accompany statement, Ms. Mazurkiewicz urged fans “not jump to conclusions [regarding the circumstances of his arrest] until the full details of what occurred come out.”

Meanwhile, despite the band’s recruitment of their frequent producer, Erik Rutan (Hate Eternal, ex-Morbid Angel), to fill in for O’Brien on live dates, both a statement from the band and a subsequent interview with vocalist George “Corpsegrinder” Fisher made it clear he would be welcomed back when the time was right…

And while I don’t hear anybody complaining (you’d have to be a real yutz to be bummed out that Erik fucking Rutan is now in Cannibal Corpse), I do hear people wondering why O’Brien ultimately didn’t rejoin the group, of which he was a member for more than twenty years.

So, naturally, when Rock Talks recently interview Mazurkiewicz, they couldn’t help but ask about the current status of the drummer’s relationship with O’Brien. His response?

It is, of course, understandable that Mazurkiewicz wouldn’t wanna air the band’s dirty laundry or talk out of school about a longtime friend’s personal issues.

It’s probably a good move from a PR perspective, too, although I doubt that really entered into the drummer’s thought process: remember that during this same interview, Mazurkiewicz expressed ambivalence with regards to being vaccinated against COVID-19… despite getting flack for voicing that very same sentiment in a different interview a week earlier. Point being, the guy is clearly not afraid of fan backlash resulting from speaking his mind, so I don’t think his declining to discuss O’Brien has anything to do with that possible consequence.

You can watch the entire interview with Mazurkiewicz below.

Metal Sucks Greatest Hits
0 -
Unearth are the Slayer of Metalcore
1840 -
The Final Word on Metal Drumming
0 -
BREAKING: Slipknot Guitarist Mick Thomson Stabbed in the Head by Brother
0 -
Worst Year Ever: All of Our 2012 Year-End Sh*t in One Place
0 -
Listen: Every Dillinger Escape Plan Song Played At Once
0 -
Ex-Attack Attack! Vocalist Caleb Shomo is Smarter than John Holgado