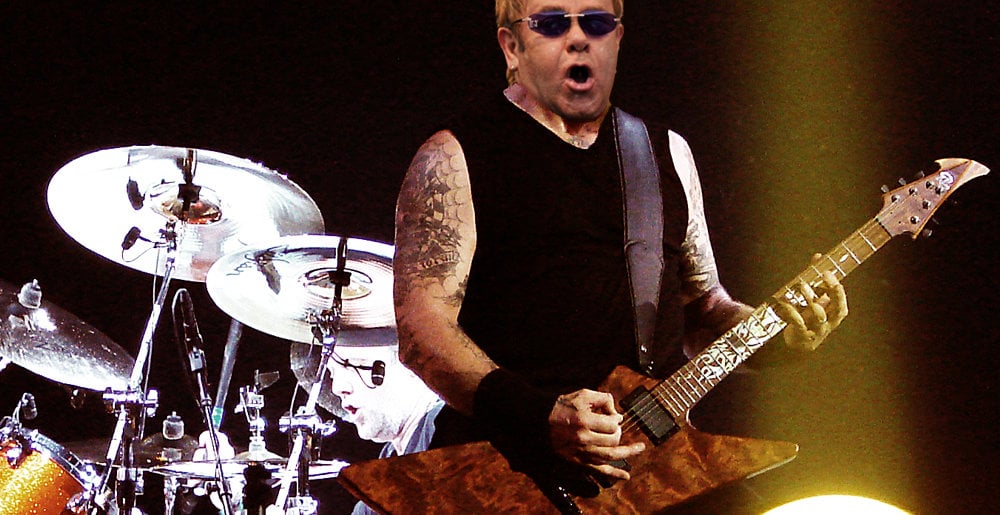 Metallica Doing Something With Elton John

Elton John did “something” with Metallica recently.

Said the Rocket Man during a recent edition of his Apple Music 1 show, Rocket Hour:

“I’ve just done something with Metallica during this lockdown period.”

Some people are taking this to mean John recorded something with Metallica. But his phrasing is so vague, he could just as easily be revealing that the band came over and helped him repaint his living room.

In fact, it’s worth remembering that Sir Elton will play piano on an upcoming recording of “Nothing Else Matters” for Miley Cyrus’ Metallica covers album (which will also feature Yo-Yo Ma and Chad Smith… now there’s a whole string of names I never expected to type in one sentence). Assuming Elton John, age 74, speaks in a similar fashion to my mother, age 75, recording a cover of a Metallica song would, indeed, be “doing something with Metallica.”

So I don’t think anyone should get too excited (“excited”) for Lulu x Levon just yet. But, hey, if Elton John “doing something” with metal music makes you all hot n’ bothered, you’ve got the Miley thing to look forward to and his appearance on the title track from Ozzy Osbourne’s Ordinary Man last year.

Metallica, meanwhile, are currently deep into “some pretty serious writing” for their next album. After first floating the idea of working on new music while under quarantine in April, by June Lars Ulrich had revealed that Metallica were, indeed, in writing mode. James and Rob have both said they’ve been busy working on new songs, too, and Kirk Hammett has trumpeted the fact that he has over 600 song ideas recorded (after infamously losing his cell phone with 300+ ideas prior to the sessions for Hardwired). The band were having some technical issues collaborating over the internet and were looking into doing so in-person in a bubble last they checked in, but that was months ago already, and Lars recently revealed that new material was coming along at a “glacial” pace.

P.S. I don’t think there’s ever been a good metal cover of Elton John. Am I wrong?

Metal Sucks Greatest Hits
820 -
Rigged: Dream Theater’s Mike Mangini Takes You Through Every Piece of His Mega-Drumkit [Part 1]
0 -
It’s Time to Stop Thinking of Women in Metal as WOMEN in Metal
0 -
Verax’s Terrible “Time Wasters” is a Great Waste of Time
0 -
G.O.A.T. and Your M.O.M.’s “Quack like a Duck” Justifies Humanity’s Entire Existence
9660 -
…And F**k You, Too.
0 -
Rigged: Jeff Loomis