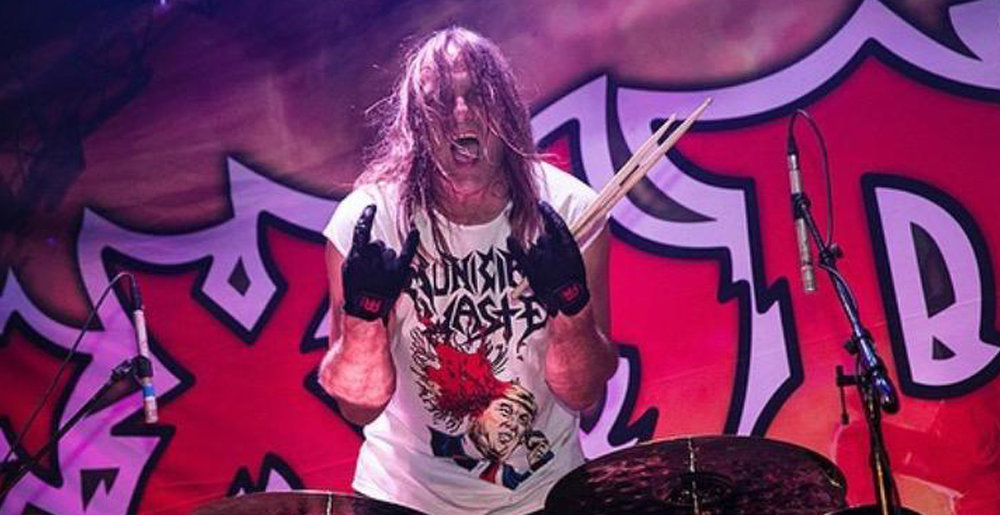 Exodus guitarist Gary Holt has launched a GoFundMe campaign to help the band’s drummer, Tom Hunting, pay his medical bills as he continues to receive treatment for cancer.

“After decades dedicated to laying down the most pummeling drums in thrash, Tom Hunting has been diagnosed with cancer. While he fights and defeats this, he will need help with his bills, both medical and home. During this pandemic Tom, like many of us, works to keep himself going while we await the return of touring, but he is unable to do so while undergoing chemo and more to get past this and back behind his drums with his brothers in Exodus. Whatever someone can afford to give will go miles to helping Tom continue his fight without the worry of the mounting medical bills and bills to maintain a roof over his head. Thanks for all your help and support.”

You can donate to the campaign here.

Hunting turned 55 on April 11. Two days later, he revealed that he has “squamous cell carcinoma… a gastric tumor that was diagnosed in my upper stomach.” He began receiving chemotherapy treatment not long after.

Metal Sucks Greatest Hits
0 -
Phil Anselmo on Hearing the End of Pantera’s “Hollow” for the First Time: “I Was Floored…”
0 -
Will People Please Shut Up About the “Fake Amps on Stage” Debate?
0 -
Footnotes: A Handy Catalog of Every Song from Which Avenged Sevenfold’s Hail to the King “Borrows”
60 -
BETTY WHITE TOUCHED SLASH’S PYTHON (DON’T WORRY, IT WAS JUST THE TIP)
0 -
11 Bands You’d Get Made Fun Of for Liking Back In The Day
0 -
What Will Happen When a Member of Metallica Dies?