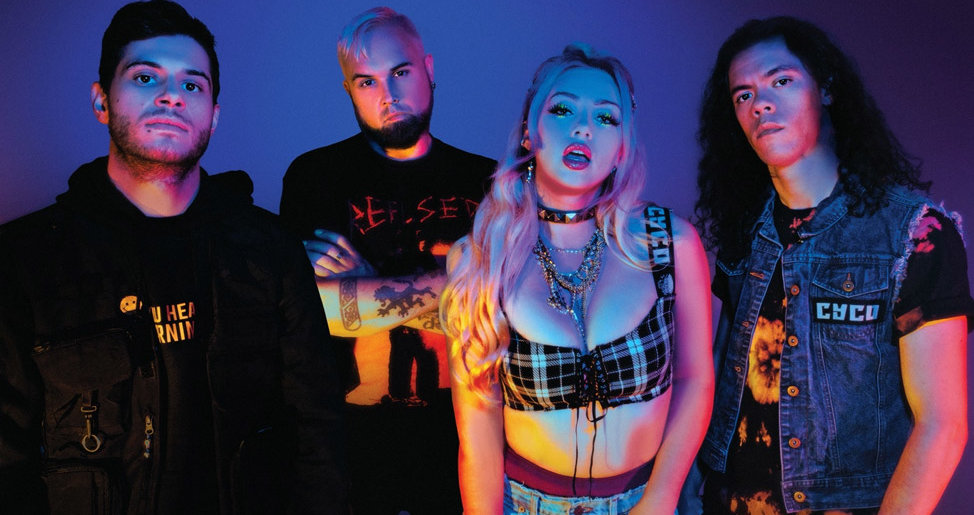 Sumo Cyco are currently causing quite a stir in the metal world. While the band are not without some detractors, the massive streaming numbers the singles from their new album, Initiation, are putting up are proof that the band are catching on in a big way. That success also backs up the assertion that great songwriting trumps all, especially when you can deliver an unstoppable hook a handful of times in a three-and-a-half minute pop gem, even if it’s gussied up as heavy music.

Which brings us to today’s guest column, which sees Sumo Cyco frontwoman Skye Sweetnam — who had a major label deal as a solo pop artist in a prior life — put together a list of 10 heavy pop songs that are sure to convert even the grimiest, most curmudgeonly metalheads to the light arts. With hits like “Bystander” burning up the charts, you could say she knows a thing or two about catchiness and heaviness together! These are her picks.

As soon as I heard grandson I knew this was an artist to watch. Great energy live and anytime I can rock out and dance at the same time it hits me in all the right spots.

One of my all time favourite bands who expertly mix hardcore and pop elements like peanut butter and jelly. They’re just better together.

There’s a reason she’s been killing it in the scene, threading the needle between pop and heavy music in a way that has everyone turning their heads around like the exorcist.

This duo is bringing it with attitude, imagery and distortion. I often describe our music as getting your head ripped off by a cheerleader and the video for this track is completely along those lines, probably why I love it!

These guys have a great dose of ridiculousness and I love bands that don’t take themselves so seriously. I can’t help but want to party when I listen to this track. Take me to the club!

This duo has some mad style that they customize themselves. Immediately I wanted to hear their music because I knew they were well all around artists. The music totally backed up my first impression. Grooves for days.

Grimes has always been a favourite of mine but the heavier she takes it the more I appreciate her power… see what I did there?

Wanna take on the world? Listen to Army of Me. Bjork is genre bending artist who is massively inspiring and loves visual art as much as I do. When I heard the Skunk Anansie remix in one of my fav movies, Sucker Punch, I was super stoked.

This song makes me want to pull some weird moves on the dance floor. Great video, in fact all of Don Broco’s videos are great.

Rina has got such great pop sensibility but mixes it with a sick grungy badass attitude on this track. Not to mention the lyrics make it feel even heavier for me with her FU attitude. Pop done right and I’m here for it!

Sumo Cyco’s new album, Initiation, is out now! Buy it here and listen to “Bystander” below.

From a new deluxe edition of their most recent album, ‘Initiation.’

The fourth single from their upcoming album, ‘Initiation.’

The alt-metal / hard rock / ska crossover act are back with another unshakably catchy ditty.