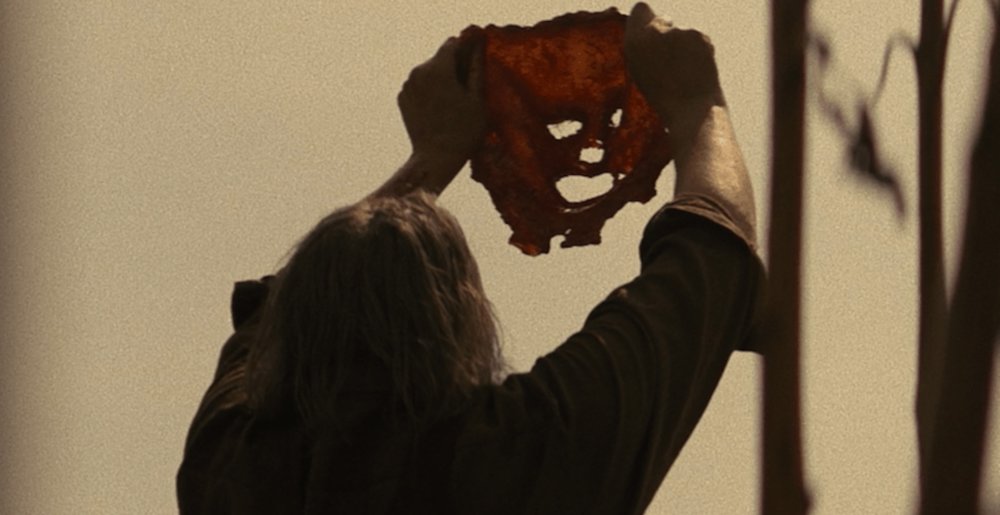 We’re definitely skeptical of what Netflix are doing with this upcoming Texas Chainsaw Massacre reboot. The take seems like a bit of a gamble, trying an Old Man Logan with Leatherface. That said, the streaming service just revealed the killer’s new mask via a new poster, and we gotta admit, it’s pretty fucked up.

As you’ll see in the image below, what we love so much about this new take on Leatherface’s mask is how it 100% looks like the drooping face of a dead person. Previous incarnations have gone for much more of a literal leather face featuring stitched-together pieces of dried jerky flesh. Meanwhile, the 2003 remake and its 2006 prequel went with something more stylized that makes us think of Slipknot’s Mick Thompson. But no, this one’s just the awful, Ed Gein-ish face of someone who just got butchered. And it looks like they probably weren’t very happy when they died.

Here’s the film’s description as per its press release:

“After nearly 50 years of hiding, Leatherface returns to terrorize a group of idealistic young friends who accidentally disrupt his carefully shielded world in a remote Texas town.”

“Melody (Sarah Yarkin), her teenage sister Lila (Elsie Fisher), and their friends Dante (Jacob Latimore) and Ruth (Nell Hudson), head to the remote town of Harlow, Texas to start an idealistic new business venture. But their dream soon turns into a waking nightmare when they accidentally disrupt the home of Leatherface, the deranged serial killer whose blood-soaked legacy continues to haunt the area’s residents — including Sally Hardesty (Olwen Fouéré), the sole survivor of his infamous 1973 massacre who’s hell-bent on seeking revenge.”

Again, not exactly how we would have gone with it. After all, so much of the franchise’s original appeal is its pure ’70s vibe. Guess we’ll have to wait and see, but hey, we dig the mask!

The new movie doesn’t seem to understand pacing, millennials, or what made the original great.

Which classic horror film posters made the cut?