Metal Sucks
Metal Sucks Neil Young To Spotify Employees: “Get Out of That... Win a Trip to See Volbeat in Las Vegas!
- Tweet SHARE
Enlarge
F-F-F-Feudin' 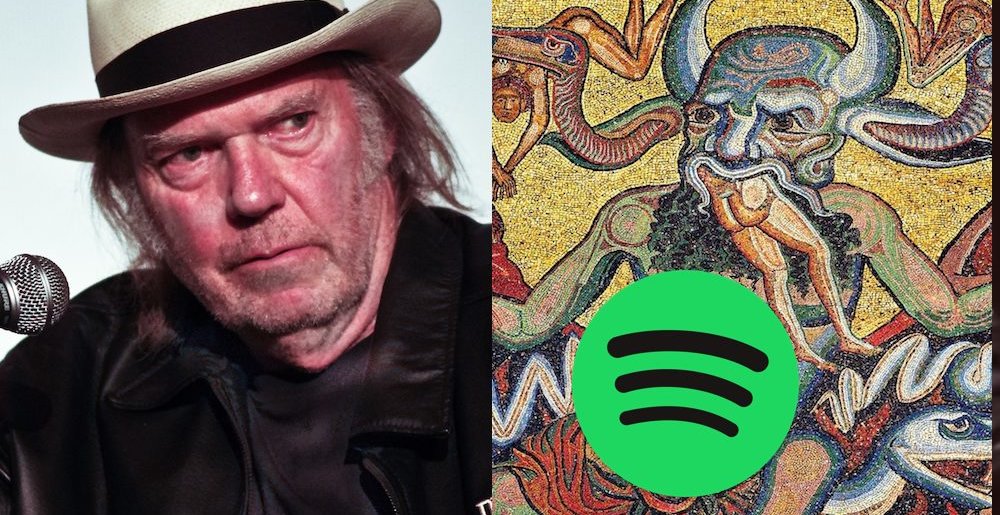 Neil Young To Spotify Employees: “Get Out of That Place Before It Eats Up Your Soul”

Ho boy, and Neil Young was doing so well. The singer-songwriter’s boycott of streaming service Spotify, which he left rather than share the platform with podcaster Joe Rogan, has picked up enough steam that it’s hurting the service’s bottom line and gotten David Draiman all up in arms (which is never a bad thing). But now, Young has published a statement on his website which makes him sound kind of preachy and insane about it.

You can read Young’s full statement below, which is pretty standard anti-corporate language and urges his readers to remove their money from banks like Citi and Wells Fargo, who he thinks are funding the destruction of the environment (which we kind of believe — we don’t have the paperwork in front of us, but sure, we doubt those companies are wholesome in their practices). He also calls on baby boomers to set an example for future generations, which we think is a noble endeavor.

But then he tells Spotify employees, “Get out of that place before it eats up your soul,” and closes by saying, “Then be free and take the good path.” And the minute someone turns an argument from That misinformation causes people harm to Your soul is in danger, it’s hard to take them seriously. That is the same concept that religious zealots peddle to make you think you need saving. Neil Young doesn’t know a damn thing about my soul.

Check out the full statement below:

“In our communication age, disinformation is a problem. Ditch the misinformers. Find a good clean place to support with your monthly checks. You have the real power. Use it.

“To the baby boomers, I say 70 percent of the country’s financial assets are in your hands compared with just about 5 percent of millennials. You and I need to lead.

“In our age of Climate Chaos, I say ditch the companies contributing to the mass fossil fuel destruction of Earth.

“For their continued funding of the fossil fuel damage even as the global temperature keeps climbing, I say take your money from the accounts of these American banks today:

“Join me as I move my money away from the damage causers or you will unintentionally be one of them. You have the power to change the world. We can do it together.

“To the musicians and creators of the world, I say this:

“You must find a better place than SPOTIFY to be a home for your art.

“To the workers at SPOTIFY, I say Daniel Ek is your big problem — not Joe Rogan. Ek pulls the strings. Get out of that place before it eats up your soul. The only goals stated by Ek are about numbers — not art, not creativity.

“Notice that Ek never mentions the Medical Professionals who started this conversation. Look, one last time — at the statements Ek has made.

“Then be free and take the good path.”