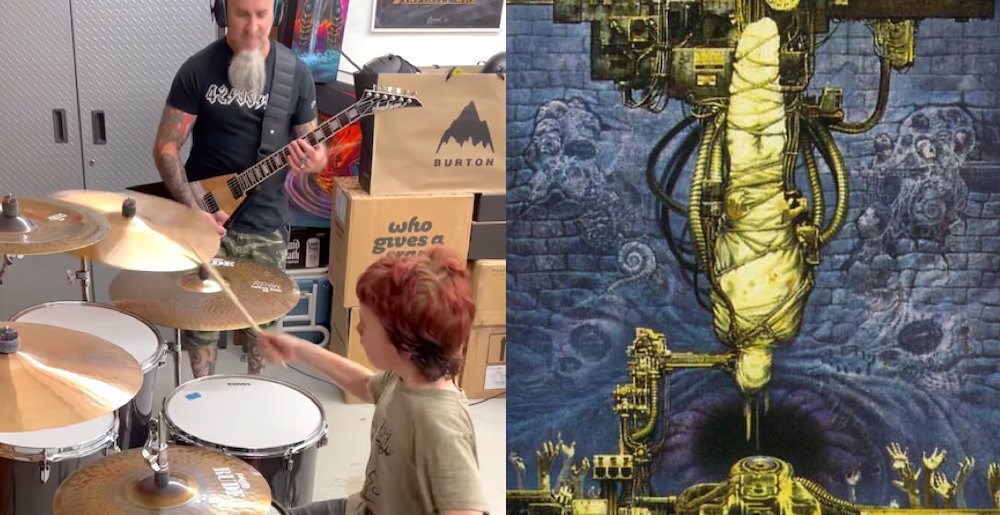 We obviously like Anthrax guitarist Scott Ian, but we’re also becoming big fans of his 10-year-old son Revel. Last month, the young whippersnapper joined his dad in jamming on Sepultura’s proto-nu-metal classic “Roots Bloody Roots”, and did a bang-up job of it, too. Now, he’s taking it back even further to 1993’s Chaos A.D. with a cover of the track “Territory,” which you can watch below.

While this seems like a simple progression for young Revel — he’s listened to Roots, he digs it, but then he starts getting into the older stuff, realizes that nu-metal shit’s for posers — it should be noted that “Territory” is especially hard work for a drummer. It opens with that real bouncing staccato rhythm from Igorr Cavalera which leads into the first squawking bit of feedback, and that drum part basically sets the tone for the rest of the track. But Revel nails it, reminding listeners of just how killer a part it is simply by playing it so well and with such enthusiasm that one cannot help but acknowledge its difficulty.

Scott, of course, was the supportive dad:

WAR FOR TERRITORY!!! Garage-jamming this crusher with my hard-hitting man Rev. The whole thing will be up on YouTube soon.

How good was his performance? Sepultura’s Andreas Kisser chimed in with a comment of “YEEEAAAAHHHHHH!” So you know the little dude did well enough.

Watch Revel do his papa proud below.

Meanwhile, if you’re less OG Sepultura and more OG Revel Ian, you can watch the kid’s original cover of “Roots Bloody Roots” below. That way, when he’s a big star, you can be that asshole who says, Oh yeah, that song he won a Grammy for? Not my thing. I prefer the underground shit, like that first cover he did with his dad on Instagram. And then everyone will fucking hate you.

Metal Sucks Greatest Hits
1,2110 -
The 101 Rules of Death Metal
0 -
Chris Brown Thinks Municipal Waste are a Fashion Statement
0 -
Joey Jordison Claims He Was Fired from Slipknot Via a Singing Telegram
660 -
KNEEL BEFORE THE POWER OF ELEPHANTS MARCHING RIFFS
2510 -
Rose Funeral: The Uno Incident?
0 -
Why are metal fans hopelessly stuck in the past??? :(