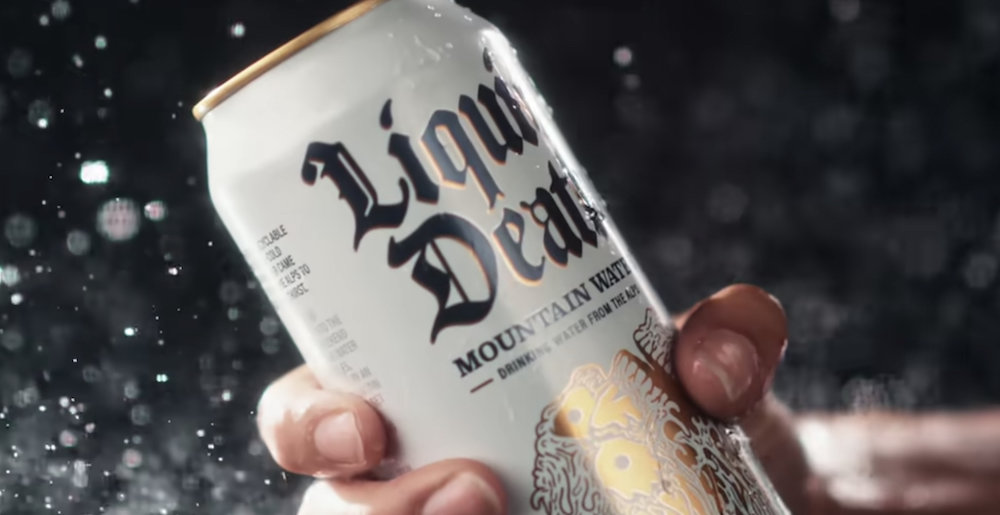 For those of you who have been in a sensory deprivation tank for years, Liquid Death is a bottled water company, except they sell water in tall boy cans with skulls and old English fonts on them so that sober metalheads can still feel like good ol’ boys drinking water instead of booze (you know Blackcraft Cult? Liquid Death do for beverages what those guys do for metal clothing). This marketing tactic has worked, though, resulting in Liquid Death becoming Live Nation’s water of choice — and earning them the money and attention needed to have a commercial during last night’s Super Bowl, which features what sounds like KIDZ BOP covering Judas Priest‘s “Breaking The Law.”

As you can see below, the whole joke of Liquid Death’s commercial is that it looks like a beer can, but it’s actually water. This is highlighted by having a party of kids pounding Liquid Death tall boys and doing drunk people shit — raising toasts, passing out mid-party, and drawing on each other’s faces. There’s even a final shot where the mom in charge pounds some Liquid Death, and then is revealed to be pregnant. Meanwhile, we see cans exploding through ice, and close with a beer stein full of water slamming down.

Look, this might sound cynical, but hey, this is MetalSucks, so: this smacks a little of grooming the next generation of hardcore beer drinkers, right? Having a bunch of little kids doing fratboy shit seems to have a message of, This is how you party, like in the beer commercials! And I hear plenty of you saying, Jesus Christ, it’s just fucking WATER, it’s a JOKE. And that’s fair. No one got hurt here. But kids internalize these sorts of things, and these guys definitely are selling the beer-chugger’s lifestyle, even if they’re selling water.

Watch the ad below:

There is certainly a similarity, but artist Justin Moll has been doing these kinds of drawings for years.

Here are this week’s most-read stories in the world of metal.

Metal Sucks Greatest Hits
0 -
Rigged: Periphery Guitarist Jake Bowen and Front-Of-House Engineer Alex Markides
0 -
I Am The Working Class: The MetalSucks Interview with Fenriz
0 -
Sean Z.’s Twelve Inch Face Pubes Win the MetalSucks Best Beard in the History of Metal Bracket!!!
400 -
Danzig is Just Cleaning Up His Motherf*cking Bricks, Bitch
0 -
A Sh*tstain on the Ass of the Universe, #28: Lie or Liar
0 -
Meshuggah’s Jens Kidman is Now a Meme