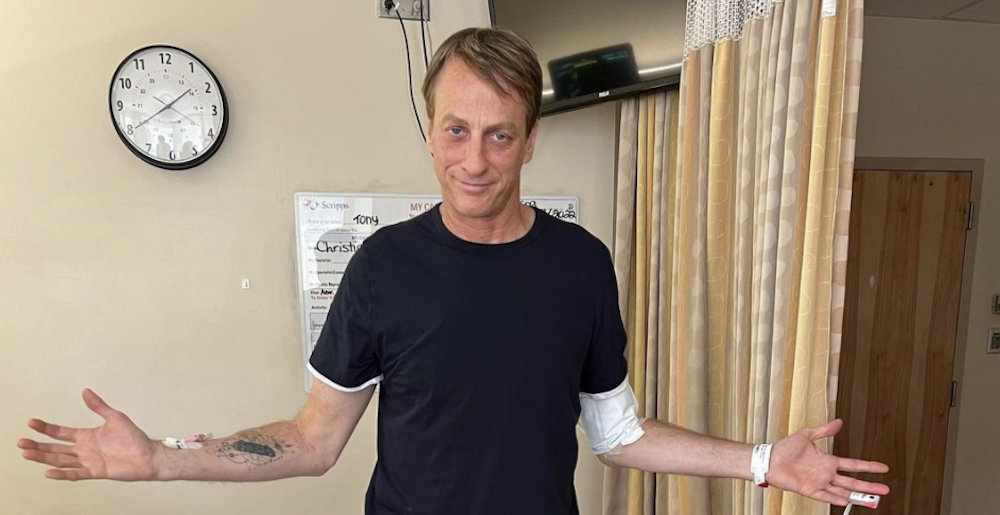 Tony Hawk Breaks Leg, Says He’ll Be Back But “Maybe Not At Full Capacity”

When you’re an athlete, a serious injury can alter the entire course of your career. This is especially true if it happens to one of the deceptively-complicated parts of your body, namely joints, shoulders, and legs. The latter is the case with legendary pro-skater Tony Hawk, who announced via Instagram that he broke his leg — and that it might be the turning point of his career.

Hawk, who’s 53, posted a photo on Instagram of his broken femur, and included a caption that basically says that this might be the injury he never fully recovers from — but that he’s actually thought a lot about that, and is okay with it.

“Yesterday sucked. I broke my elbow 20 years ago and managed to make a full comeback; this recovery for a broken femur will be much harder because of its severity (and my age). But I’m up for the challenge.
There is a strange irony that this happened on the eve of HBO releasing a trailer for “Until The Wheels Fall Off,” Sam Jones’ documentary about my life & career, which has a strong focus on the philosophy of how I/we do this at our age.

“The answer is complicated, but ultimately it’s because I have found my sense of purpose and shaped my identity through skating, and it nourishes my mental health immensely. I’ve said many times that I won’t stop skating until I am physically unable. A broken leg – with plenty of hardware – will probably be the biggest test of that creed. I’ll be back… maybe not at full capacity but I resigned to that notion years ago as I approached “mid-life.” Thanks to my unyieldingly supportive, tolerant family – and all of you – for the love and support through the years; I wouldn’t be here without you. See you on the other side.”

Look, this blows for Tony, in part because breaking your femur sounds like the most painful shit anyone could casually endure. But we have to admit, we’re really, really impressed by how thoughtful he’s being about this. It’s really easy to force yourself to say, I’LL BE BACK, BETTER THAN EVER! But it takes a lot to admit that this might change things.

In any event, we wish Tony a speedy recover and good luck moving forward. We’re rooting for you, dude!