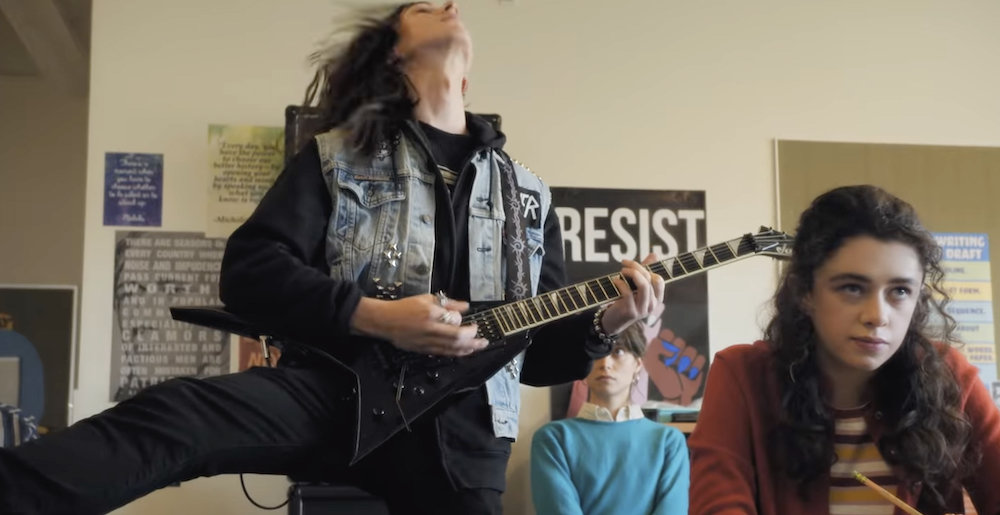 At this point, the metal teen comedy has become part of the cinematic landscape. Seems unlikely, yeah, but flicks like Deathgasm and Heavy Trip have made metal a vital and goofy part of film at large. Now, Netflix is getting in on the game with their Tom Morello-produced teen comedy Metal Lords, the first trailer for which you can watch below.

The first thing we’ll point out about the film is that it seems a LOT like Jason Lei Howden’s Deathgasm, in a lot of ways. You’ve got the soft-spoken dude who likes the non-metal girl, you’ve got the taller friend who’s equally rude and heartwarming, you’ve got the corpsepaint reveal at the end — all Deathgasm trademarks. That said, the movie also looks a little less ridiculous and more human than that one, so it’s probably a different beast altogether.

Says Morello of the film and his involvement, via Billboard:

“I grew up in a small, cloistered, conservative suburb where my musical tastes ran against the grain of almost everybody else in school and certainly all of the teachers, so this is something I can very much relate to. It’s a story of kids trying to get their first band together and having a dream, but perhaps not having the technical ability or the artistic vision to make that dream real. Or do they?

“For me, it harmonizes in a lot of ways with the real story of so many kids who are locked in these suburban hells and the key to get out is an electric guitar or drums or rock and roll music. The music shows a way to transcend this stifled daily existence, to try to be something better, be something more authentic and true than what’s handed to you by your surroundings.”

Check out the trailer below. Metal Lords comes out April 8th on Netflix.

Sponsored Links from Across the Internet
Show Comments
Related Articles
Cinemetal 0
Things Are Going to Get F*cked Up When Junji Ito’s Netflix Anime Maniac Drops January 19
October 28th, 2022 at 10:25am Hesher Keenan

It’s all pretty fucked up.

Keeping the members of Rage Against the Machine from injuring themselves is turning into quite the task.

Woodstock ’99 did not live up to expectations and this new documentary series shows you why.