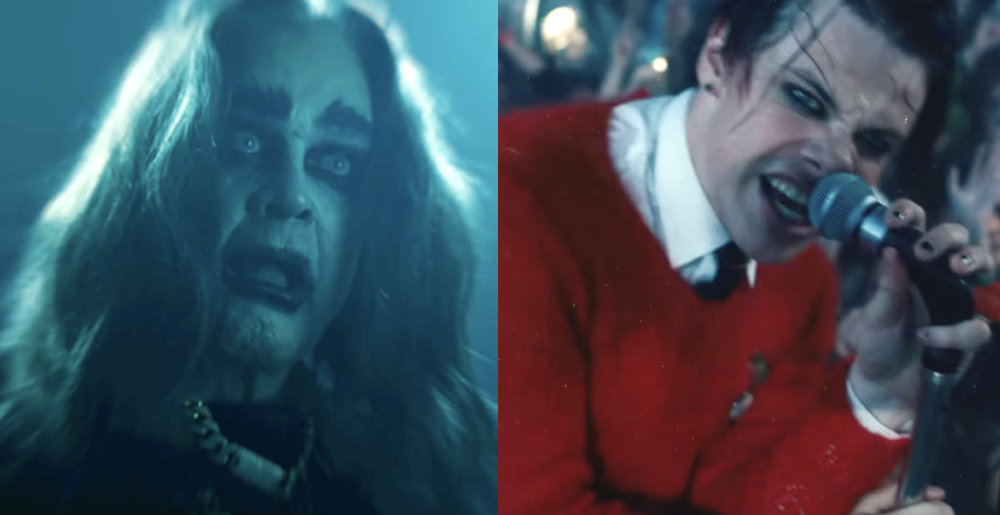 When it comes to YUNGBLUD, I will allow the MetalSucks comments section its normally-obnoxious cry of, Who? That’s because unlike so many of the artists that elicit this comment — you know who Billie Eilish is, you asshole, you’re alive right now — YUNGBLUD hasn’t permeated the scene that far outside of the UK. I only know him because I used to work for Kerrang! But if you want a general idea of what the dude is about, you need look no further than his new video for “Funeral,” which guest-stars Ozzy and Sharon Osbourne.

“Funeral” has all the things that make YUNGBLUD so appealing to contemporary rock fans who don’t really want to go all the way into punk or metal. There’s a one-two of reserved sweaters and overly spiked leather, coupled with music that sounds like someone added too much milk to AFI. There’s repeated references to his own death, and lyrics about how he’s both an awesome rock star and a total loser. There’s a lot of dyed hair in his face. All of this, and a celebrity cameo from Britain’s greatest metal star, who looks like he’s not sure how he got here and wonders who put all this crap around his eyes.

Thing is, you gotta watch the video until the end. Because — SPOILERS, DIEHARD YUNGBLUD FANS — at the end, Yungblud gets killed, and gets called a “fucking poser.” Which is all we could ask for, and at least shows that the kid has a sense of humor about himself. A dude like Machine Gun Kelly seems 100% up his own asshole, but if you’re going to dress up like Emo Angus Young, the least you can do is make fun of yourself. A tip of the cap to Mr. BLUD, even if it’s a very light tip. Otherwise, what would the other metalheads think of us?

Check out YUNGBLUD’s “Funeral” below:

Metal Sucks Greatest Hits
0 -
Advanced Discrimination & Dragons: A Critical Look at Varg Vikernes’ Myfarog RPG
3220 -
What is UR Favorite Classic Nu-Metal Band??
0 -
Website Photoshops Dogs in Place of Bass Guitars Because Why Not?
0 -
What Will Happen When a Member of Metallica Dies?
0 -
Listen: Every Dillinger Escape Plan Song Played At Once
0 -
Oderus Urungus from GWAR Reads Goodnight Moon