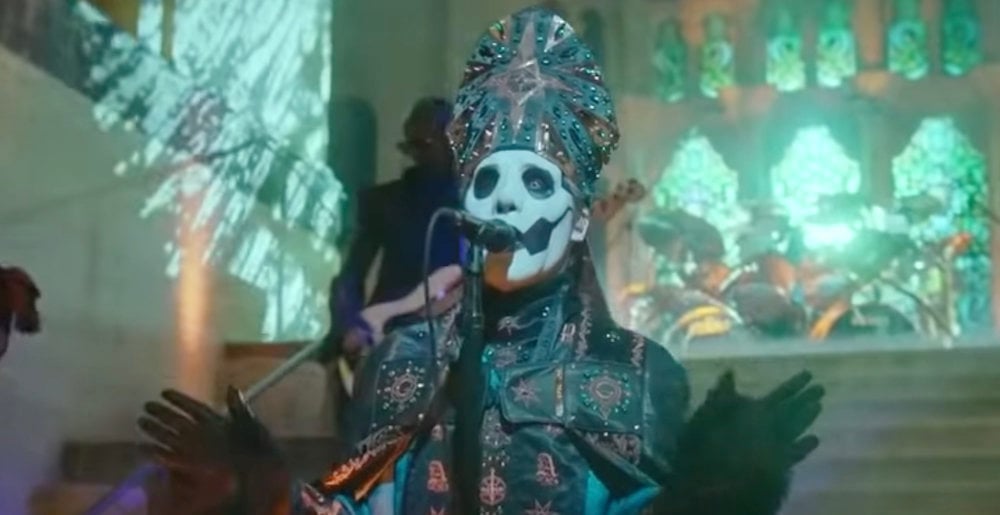 Ghost Are Working On an IMPERA Music Video “Trilogy”

If there’s any band on top of the world right now, then it’s definitely Ghost. IMPERA, the Swedish occult rockers’ latest, debuted at #2 on Billboard and sold a whopping 62,500 physical copies during its first week (70,000 if you count digital). If that weren’t enough, they’ve got a lot more music videos on the way, too.

In an interview with Viktor Wilt of Idaho’s KCVI, frontman Tobias Forge said that Ghost are working on not just a single music video, but a trilogy of videos, for the tracks “Call Me Little Sunshine,” “Twenties” and “Watcher In The Sky:”

“Sometimes there’s a difference between — obviously, you in radio know that — the songs that we release as singles and the ones that are singles that we push with a video and all that stuff.

“Right now I know what we’re hoping to do a little bit later in the year. Long story short, we’re making sort of a trilogy of videos for ‘Call Me Little Sunshine,’ ‘Twenties,’ [and] ‘Watcher In The Sky.’

“And that is sort of in the making. So it might be that that is sort of a different piece; that might be a different thing that comes out sort of separate to a radio campaign, whereas obviously we have our eye on what we’re gonna do towards the fall in terms of what song we’re making a video for right now and so forth.”

Forge didn’t give much more detail on the contents of the videos, however. If they are trilogy, then it would assume the idea that all the videos have a concurrent story, but that isn’t confirmed.

Maybe we’re getting something along the lines of Ghost Begins, The Ghost and The Ghost Rises, directed by the counterculture version of Christopher Nolan? There are something like six live-action Batman actors now (for movies at least), and Forge has to have about as many iterations of his frontman character at this point, so it can’t be that much of a stretch.

When we find out more details that confirm they definitely are not using my idea, we’ll let you know. Meanwhile, European fans can catch Ghost at one of the dates listed below:

Sponsored Links from Across the Internet
Show Comments
Related Articles
Viral Vomit 0
Here’s What Was Inside That Ghost Exhibition Showcasing Their Make Believe 60s Era
February 2nd, 2023 at 10:33am Hesher Keenan