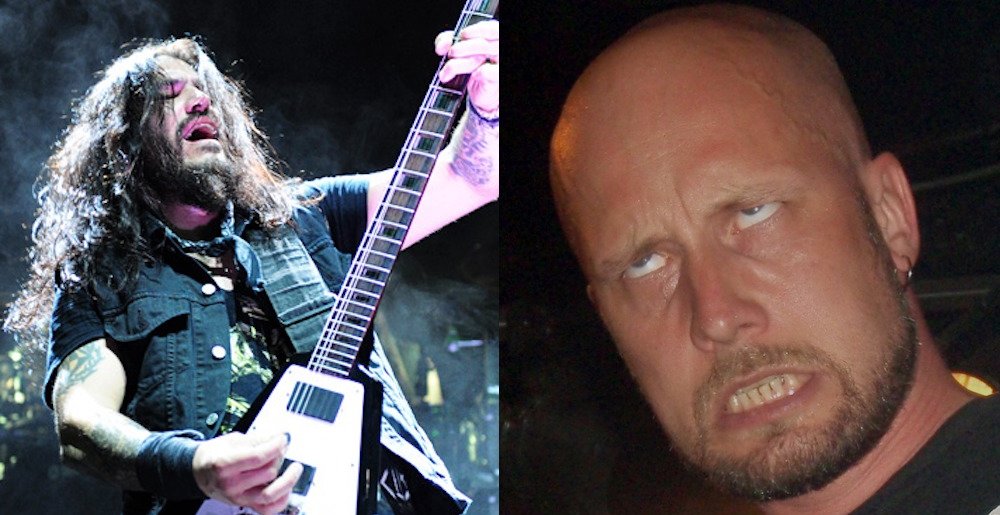 Robb Flynn by Stewart Sevastos, Meshuggah by Lykantrop, via Wikipedia.

Machine Head’s Robb Flynn On Hearing Meshuggah for the First Time: “The Guitar Tone Ripped My Face Off”

Hearing Meshuggah for the first time is always a fascinating moment in a metalhead’s life. The listener either thinks, What’s all this wonky nonsense? or, Holy shit, whatever this is, I’m HERE FOR IT. The latter was apparently the reaction of Machine Head frontman Robb Flynn, who recently interviewed guitarist Mårten Hagström for Metal Hammer and related the story of his first experience hearing the band.

Speaking to Mårten, Flynn described how he got his first taste of Meshuggah as part of a massive metal care package from his new label:

“When I signed to Roadrunner, Monte [Conner, former A&R] sent me a huge package of CDs from all over the world. There was death metal bands, thrash metal bands, and you guys, the None EP. I remember being fucking blown away, dude. The guitar tone ripped my face off. I was like, ‘Holy shit, this is fucking sick!’ Then Burn My Eyes comes out [in 1994] and we got to do the headline tour. Ian Sales was our booking agent, and we’d just done the Slayer tour, and he was like, ‘Who do you wanna take on the road? ’Cos I want my band Mary Beats Jane to go out with you guys.’ He sent me the CD and I was like, ‘It’s cool, it’s kind of like funk rock, and we [also] need something heavy: fuckin’ Meshuggah!”’

Get tickets to have your face ripped off at one of the dates on Meshuggah’s upcoming U.S. tour:

w/ Torche and In Flames

Metal Sucks Greatest Hits
0 -
Report: “The Number of Heavy Metal Bands in a Given Country is Associated with its Wealth and Affluence”
0 -
Heavy Metal Kitten Covers
2760 -
Who Are The Top Ten Lyricists?
0 -
Heavy Metal Drinking Games
0 -
Having a Rough Day? Try Hatebreed Motivational Posters!
880 -
Anthrax: 101 Singers We’d Rather See Than Joey Belladonna