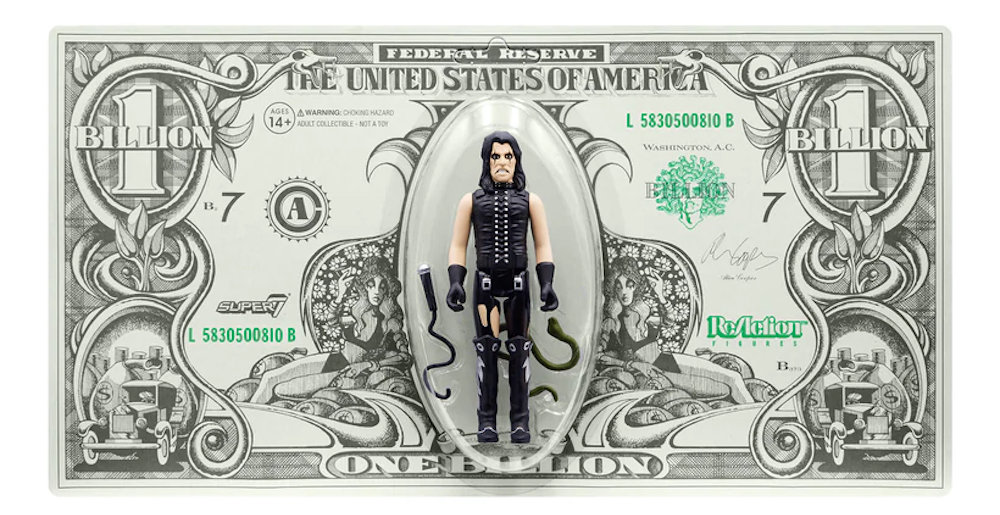 When alternative toy company Super7 launched their ReAction figure line, I was at first dubious. Turning everyone’s favorite characters into little G.I. Joe and Star Wars-style toys seemed like kind of a weird choice, especially after Todd McFarlane introduced the world to perfectly-sculpted collectible action figures. But over time, the company won me with its cool variants, rad packaging, and solid choice of heavy metal stars and mascots to be immortalized. And now, they’ve taken on a pretty obvious subject: Alice Cooper.

Super7’s Alice Cooper action figure comes dressed in his Billion Dollar Babies-era high-neck jumpsuit and ripped stockings; in fact, the figure’s packaging is done in the style of the giant billion-dollar bill insert that came with the original vinyl album. Also included with the toy are one of Alice’s snakes and a mic that sort of doubles as a whip. It’s pretty rad, and if you’re an Alice Cooper diehard and have $18 to spare (more like $24 with tax and shipping), then why not?

Check out Super7’s toy below. Meanwhile, get tickets to see Alice in the flesh at one of his upcoming tour dates:

Metal Sucks Greatest Hits
220 -
Hey Guys, Did You Know That Virgin Steele are From Long Island?
0 -
MetalSucks Readers Declare Pantera The Most Unnecessarily Shat Upon Band in Metal!!!
0 -
Type O Negative’s Peter Steele Once Punched Chino Moreno In The Face for Inciting an Onstage Riot
0 -
Editorial: Your Dead Metal Heroes Were No Angels
0 -
Watch: Bruce Dickinson Rips On Fan for Smoking Weed at Iron Maiden Show
0 -
L.A. Band Threatin Faked a Fanbase To Land a European Tour No One Attended