Metal Sucks
Metal Sucks 10 Bands Who Shamelessly Copied Another Band Korn’s Ray Luzier Would Be Down to Collaborate With...
- Tweet SHARE
Enlarge
Br00tal-lists 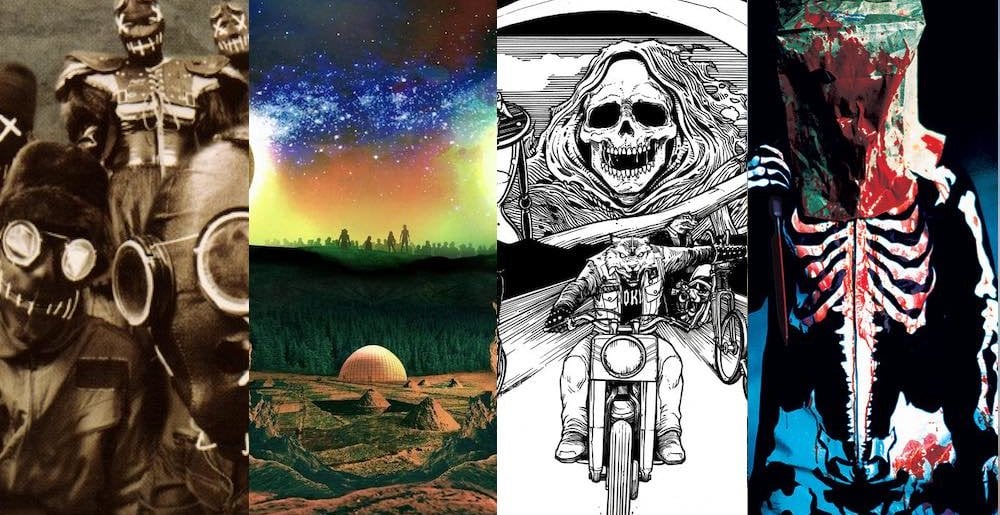 10 Bands Who Shamelessly Copied Another Band

They say imitation is the sincerest form of flattery — and damn, do some bands get flattered. Over the years, certain acts have been so influential that one can picture them as the trunk of a family tree off of which branches an entire musical subgenre. And we’re sure that these bands are proud to see others take their ideas and run with them…but as with all things, there’s a limit.

While plenty of artists have been inspiring and influential, others just got straight-up copied. And usually, these rip-offs products are so egregious that fans see or hear them and instantly think, Ho boy, these guys owe _______ a royalty check.

So in the name honesty (and boredom), we decided to rack up 10 of the bands who did a little more than borrow from their idols.

Here are 10 bands who copied their biggest influence so hard, it’s shameless..

No band is the Pepsi of metal as much as Mushroomhead. Hot on the tails of Slipknot’s popularity, the Ohio crew came out with their own masked, costumed, too-many-members agro metal group – only they did it in get-ups that looked like they were designed by Monster Energy Drink. The result was an act who many people like, but which will always be seen as a clone. That they later got super into the Confederate flag didn’t do a lot for their image.

What could be better than AFI? British AFI! Creeper have made a solid name for themselves in the modern pop-punk scene, and they’re massive among the bouncier goths of London. But all of us who lived through the Art of Drowning-into-Sing the Sorrow transition can spot their biggest influence from a mile away. Hey, whatever straightens your Devilock, you know?

We love the shit out of Cleveland’s Midnight – because we love Venom. And make no mistake, the black-thrash three-piece go hard in their appreciation for their British NWOBHM counterparts, with a ‘Venom’ tramp stamp appearing in many of their older band photos. Hey, sometimes being so influenced by a band as to straight-up bite them off ain’t a bad thing.

With Twiztid, maybe ‘copied’ is the wrong term. It’s just seems like Twiztid saw the Insane Clown Posse ‘thing’ – the irreverence, the craziness, the tongue-in-cheek morbidity — and thought, Yup, we’re here for THAT. And ICP responded, taking the band under their wing immediately. At this point, the duo’s look and sound is drastically different from those of ICP, so they’ve definitely grown into their own beast – but let’s never forget that they started as the Dark Carnival’s bastard children.

With Jared Leto’s 30 Seconds to Mars, you’ve got two choices. It could be Deftones, or it could be Chevelle. Either way, the band’s anguished, long-form hard rock definitely owes a nickel or two to one of those bands. You know what, we’re calling it. They don’t get artsy enough for Deftones. It’s definitely Chevelle.

This isn’t even a secret. Ask Speedwolf frontman Reed Bruemmer about their background, and he’ll be real with you about exactly who his band owe everything. In fact, he told us that in 2016, in an interview where he literally described Speedwolf as “this band that sounds like Motörhead.” If you’re going to copy Lemmy, honesty is definitely a great place to start.

Look, if you start as a Slayer cover band, it’s unsurprising that your eventual original material would sound like Slayer. And that’s exactly what happened with Swedish thrashers Corporation 187, who had a short but solid run in the early 2000s. Even after trading their shouty Tom Araya vocals for gnarly high-pitched ones, you could hear the Slaytanic influences in these guys’ music. Hey, at least they followed their dream.

Biting off your favorite band so hard that they do a split with you – now THAT’S dedication. And that’s what happened to Japanese horror-punkers Balzac — in 2002, the band recorded a split with The Misfits, in which the New Jersey punk legends performed the titular single (see above) while their Japanese counterparts covered two Michale Graves-era songs. Why pretend you’re not copying someone, when you can just copy them so hard that they love you for it?

As we’ve stated in the past, we don’t think that Greta Van Fleet necessarily meant to sound exactly like Led Zeppelin. But not only is it undeniable that they do, but the band’s dress sense and aesthetic also suggest that they are going all-in on their Zep worship. So while Pitchfork’s infamous review of their debut might be overly harsh, we have to admit that the cosplay aspect of it rings true. Then again, they’re wildly successful, proving that ripping off the most popular rock band of all time ain’t necessarily a bad idea.

In the early 2000s, Susperia, featuring Dimmu Borgir drummer Ian Kenneth Åkesson, AKA Tjodalv, and Dimmu Borgir keyboardist Øyvind Johan Mustaparta, AKA Mustis, made a couple of pretty cool albums…that sounded a LOT like Dimmu Borgir. True, the band worked hard to incorporate thrash influences from bands like Testament and Dark Angel into their sound, but they none the less sounded, and looked, and felt like Dimmu. All that said, if you like Dimmu Borgir, fuck, you can’t go wrong with these records. That opening of “Chemistry?” Just delicious.

Did we miss anyone? Are there bands who stand out as egregious copycats who we forgot? Let us know in the comments.

Thank god for Lemmy and the boys.